Apple today seeded the first beta of the upcoming macOS 11 Big Sur update to its public beta testing group, allowing non-developers to give the software a try ahead of its public release this fall. 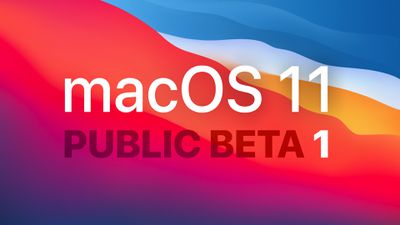 dannyyankou
The fact that the public beta was delayed tells you all you need to know. Proceed with caution.
Score: 10 Votes (Like | Disagree)

Apple Macintosh 128K
Always fun to see the complaints that come with this, when people don't understand what the word "beta" means. "One of my apps isn't working!!!!! Apple is the worst!"
Score: 6 Votes (Like | Disagree)

chama98
Not even going to bother. If any of the developer betas have anything to go by. I am holding off till the final release date. Life is too short to go bug hunting, going to leave that to you lot.
Score: 6 Votes (Like | Disagree)

DreamyLucid
Update, everything seems fine so far. Big Sur is relatively much faster than Catalina as well.
Score: 5 Votes (Like | Disagree)

dooyou
No thanks, I stay with Catalina which is still beta.
Score: 3 Votes (Like | Disagree)

jlocker
There are a lot of people downloading the public beta right now, so servers are getting maxed out with connections.
Score: 3 Votes (Like | Disagree)
Read All Comments