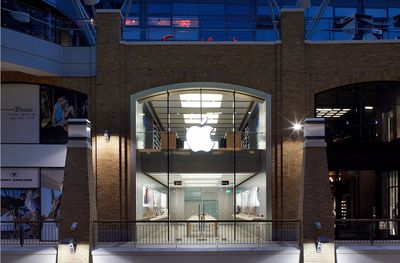 Video shared on Facebook appeared to capture a clean-up operation taking place at the store. In the clip, two people wearing breathable isolation suits can be seen wiping the Sequoia wood tables, which appear to have been cleared of products.

An anonymous tipster told MacRumors that all devices were removed from the store and the shop floor was still empty as of 8:10 a.m. local time on Thursday morning. A call to the store confirmed that Apple Victoria Square is now open, however staff declined to confirm or deny that a decontamination had taken place overnight. We've reached out to Apple for comment and will update this article if we learn more.

Two more cases of coronavirus were confirmed in Northern Ireland on Wednesday, with one a postgraduate student at Queen's University in Belfast. The student had recently returned from Italy and mixed with others at university. The other adult had been in contact with someone in the U.K. who had tested positive for COVID-19.

It's not clear if specific information relating to the movements of the infected adults led to a deep clean of Apple Victoria Square. Whether a decision was taken by Apple itself or was undertaken as part of broader contingency measures by local government to mitigate the spread of the virus remains unknown.

The latest positive tests took the total number of cases in the region to three, none of which are thought to be linked. The United Kingdom as a whole had its biggest day-on-day increase in coronavirus cases on Wednesday, bringing the total number to 87. There are 80 in England, three in Scotland, and one in Wales. The British government's response to coronavirus is already moving into its second "delay" phase, rather than seeking to simply "contain" the disease.

Apple Victoria Store reportedly underwent a deep clean Wednesday night
Apple has temporarily closed some of its retail stores in Italy following a government decree, as the country grapples with the spread of COVID-19. The number of deaths has surged in Italy, which is now the country with the most deaths in the world outside of China, where the viral outbreak originated.

Apple closed all 42 of its retail stores in China at the beginning of February as the outbreak in China worsened, but most of the stores have re-opened, albeit operating with shortened hours. New infections and deaths reported in China have been declining in recent weeks, according to government data, suggesting the virus may have peaked there. There were 119 new confirmed cases in China on March 3, compared with 125 the day before.

In the U.S., the death toll from COVID-19 climbed to 11 on Wednesday, while California has declared a state of emergency because of the spread of the virus after it reported its first fatality. The death was of an elderly man with underlying health issues. The state now has 53 confirmed cases. It was the first death from the outbreak in the U.S. outside of Washington state.

Meanwhile, Apple has pulled out of the SXSW 2020 Film Festival to be held later this month in Austin, Texas. The company planned to premiere new original content coming to Apple TV+, but will no longer attend because of ongoing concerns. Organizers said last month that the event would proceed as planned despite some cancellations related to the virus.

We're still waiting to hear news regarding the fate of this year's Worldwide Developers Conference, which usually takes place in San Jose, California. Apple has not announced dates for WWDC 2020, but based on past events, June 8 to June 12 are the likely dates that Apple is targeting.

Apple may still have some time before it makes a decision about whether to cancel WWDC this year due to coronavirus concerns, but with Facebook and Google both canceling May events, current circumstances aren't looking favorable.

Update: Apple has informed MacRumors that a deep clean did not take place at Apple Victoria Square on Wednesday night. The video shows a routine retail restoration which took place before the spread of COVID-19, although Apple did acknowledge that all of its stores are receiving regular enhanced cleaning in light of the viral outbreak.

PeterBloch
MacRumors should immediately remove this article. You KNOW it is fake news. Putting an after-the-fact tag on it saying it is fake only helps a little.... there is nothing useful in this article, it only sows the seeds of misinformation
Score: 7 Votes (Like | Disagree)

indiekiduk
I think its ok to keep online debunked rumours, but keeping online something that was created to cause panic is irresponsible and just encourages them to do it again.
Score: 3 Votes (Like | Disagree)

Percentage or two difference is not 30x more deadly.

Of course it is. It’s simple math.

GDF
This article should be gone and very poor journalism to keep it displayed. Tired of hearing about the virus. Total media hype. So it is a flu, why is everything closing and stopping because of a flu? We do not do that with normal flu, so why this? Someone needs to explain that, as this is crazy!
Score: 1 Votes (Like | Disagree)
Read All Comments