Apple will temporarily close one of its retail stores in Italy as the government grapples with the spread of COVID-19 in the country, which has experienced the worst outbreak of coronavirus in Europe so far. 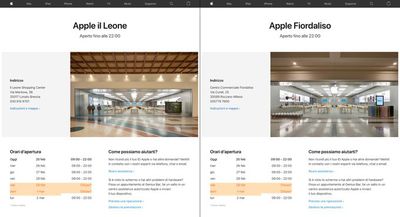 Image via SetteBIT
Apple Oriocenter in the province of Bergamo will be closed on March 7 and 8, according to Apple's regional website, on orders from the Italian government.

The notice is the result of a decree of the President of the Council of Ministers issued last week that will see all medium and large retail stores, including commercial outlets inside shopping centers, shuttered over the coming weekend to halt the spread of the virus.

The decree covers the provinces of Bergamo, Cremona, Lodi, and Piacenza. Similar measures will also be undertaken in other Italian provinces.

The number of deaths has surged in Italy, which is now the country with the most deaths in the world outside of China, where the viral outbreak originated. In the last 24 hours, 27 people have died of the disease in Italy, bringing the total number to 79, according to the Civil Protection Agency.

Apple in early February closed all of its corporate offices, stores, and contact centers in China, but many stores have since reopened as the outbreak there appears to be slowing. There were 119 new confirmed cases in China on March 3, compared with 125 the day before.

An additional 38 people died on March 3, bringing the death toll in mainland China to 2,981. China has now had 80,270 cases since the virus first appeared in Wuhan province in December.

Morgenland
Russia manages its figures even better than America...

As the article states its is a decree of the government, Apple didn't chose to close its stores and the one in downtown Milan stays open, as it is not inside a mall.
What is weird about the decree is shopping centers are not closed, you can still go there and buy groceries but all the retail stores that don't sell food cannot open.

It makes sense. I think the decree is there to minimize mall traffic that are not there to buy essentials.
Score: 6 Votes (Like | Disagree)

The Chinese tourist who knowingly traveled to Italy while feeling ill and at risk is a real piece of crap. So is that Chinese lady who traveled to France as soon as she felt ill, and then took medicines to avoid authorities from detecting her high temperature. Literally no shame or conscience.

This is definitively fake news you are spreading here. While the first person who got ill is well known (a young man fighting for his life), it is still unknown, how the virus came to Italy in the first place.

And would you lock yourself in your room for two weeks with just slight symptoms of a common cold. All over the world there are thousands unknowingly carrying the virus? It doesn't have to be a Chinese person. It could as well be an Apple employer who met a Chinese colleague in January before the virus outbreak was made public and than traveled to Italy.
Score: 5 Votes (Like | Disagree)

satchmo
On a related note, I've always wished Apple provided hand sanitizer stations at the entrances of their stores.
These stores are a breeding ground with so many people touching devices.
Score: 3 Votes (Like | Disagree)

Hand sanitizer is not going to do anything when the virus is airborne!

But it's not the only way.

From the CDC:
Spread from contact with infected surfaces or objects
It may be possible that a person can get COVID-19 by touching a surface or object that has the virus on it and then touching their own mouth, nose, or possibly their eyes, but this is not thought to be the main way the virus spreads.
Score: 2 Votes (Like | Disagree)
Read All Comments