Deadline reports that Apple has already greenlighted a second season of Apple TV+ space drama "For All Mankind," along with additional seasons for several other shows set to debut on its upcoming streaming video service. 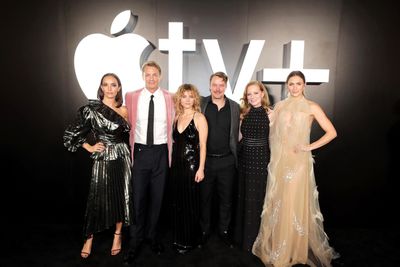 The cast of "For All Mankind" celebrated the show's premiere on Tuesday
Renewing the shows early is said to be part of a strategy by Apple to queue up original content and ensure there's a steady pipeline of programming by avoiding lengthy hiatuses between seasons.

Apart from "The Morning Show", which was picked up on a two-season deal, Apple previously hasn't officially confirmed second seasons for any of the shows it's promoting ahead of the launch of ‌Apple TV+‌ on November 1.

Apple premiered "For All Mankind" on Tuesday at the Regency Village Theater in Westwood, California, where show stars Joel Kinnaman, Michael Dorman, Sarah Jones, Shantel VanSanten, Wrenn Schmidt and Jodi Balfour were in attendance. The show imagines a world in which the global space race never ended and the space program remained the cultural centerpiece of America's hopes and dreams.

The first three episodes of "For All Mankind" will be available to watch on ‌Apple TV+‌ on the day it launches, while new episodes will continue to roll out weekly, every Friday. Apple has launched a press site showcasing information on a number of movies and series coming to ‌Apple TV‌+, which will be priced at $4.99 per month for up to six family members.

The service will be available on the ‌Apple TV‌ app on iPhone, iPad, ‌Apple TV‌, iPod touch, Mac and other platforms, including online via www.tv.apple.com. Customers who purchase any new ‌iPhone‌, ‌iPad‌, ‌Apple TV‌, Mac or iPod touch starting September 10, 2019, are eligible for one year of ‌Apple TV+‌ for free.

ryuok
I'm sure they renewed them due to overwhelmingly positive reviews from subscribers
Score: 22 Votes (Like | Disagree)

It won’t. But it makes a nice distraction. Macrumors and other blogs can’t help themselves. They’ll go nuts reviewing this trash for no apparent reason other than Apple paid for someone to make the mess.

And in a time when Apple needs people taking about services (even though this will hurt services and isn’t the service you wanted).

BWhaler
I really don’t understand why Apple is doing this. How will it sell more hardware? This entertainment subscription business will be unprofitable for a decade, if not longer. I don“t see ecosystem lock-in either. Just seems like an ego/fun exec project.

Seriously, I would love for someone to explain this to me.
Score: 10 Votes (Like | Disagree)

those are completely separate, with different people working on each
Score: 9 Votes (Like | Disagree)

BigBoy2018
Kind of a tossup on what shows to renew and what shows to cancel when all of them have the same number of viewers: 37 (including Tim Cooks mom).
Score: 9 Votes (Like | Disagree)
Read All Comments