Monday October 14, 2019 1:20 pm PDT by Eric Slivka
Apple has launched a new press site for its upcoming Apple TV+ service, offering quick access to details on each of the movies and series coming to the service. 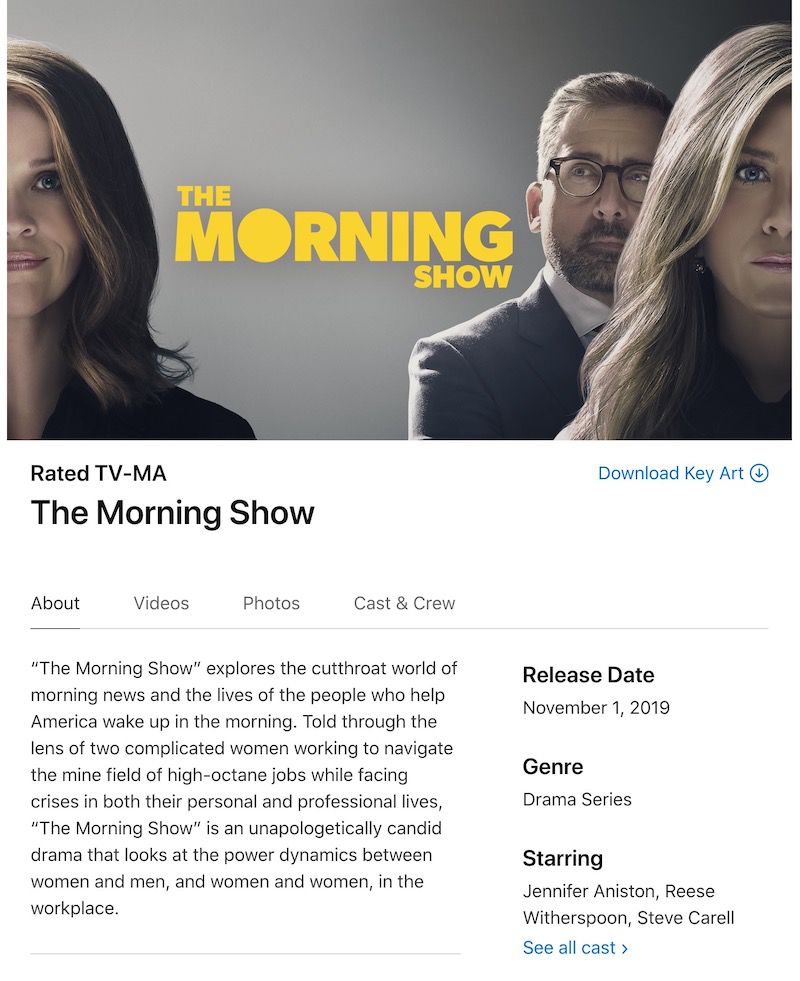 Apple is currently featuring 15 titles on the press page, eight of which will be launching on November 1 alongside the service's debut. Others will be following in later weeks, while some are still listed only as "coming soon."

‌Apple TV‌+ will be priced at $4.99 per month with a one-week free trial. Users who purchase a new iPhone, iPad, ‌Apple TV‌, iPod touch, or Mac on or after September 10 will qualify for a free one-year subscription. Up to six family members can share a single ‌Apple TV‌+ subscription through Family Sharing.

Rogifan
One thing missing from Apple since Steve died is the ‘why’. We get the what and the how but we rarely get the why. Why is Apple creating its own content? So they can charge people $5/mo is not an answer. Do Apple execs think there’s a dearth of good video content out there and Apple is best suited to fill that void? Because right now it seems Apple TV+ is nothing more than Apple having more money than execs know what to do with along with hardware sales going flat so execs are looking for any other way they can make money off existing customers. And then add in Wall Street being obsessed with recurring revenue streams aka “services”. To me the whys are all financial which I’m not sure makes a great product.
Rating: 8 Votes

agsystems
Uh - interesting - most of the shows are TV-14/TV-MA and over - not what some people were suggesting (i.e, kids, PG13 only shows)
Rating: 7 Votes

Mac Fly (film)
Apple needs a bio page for each actor and should have same for writers, directors, cinematographers, producers, etc. People deserve credit and those of us into film want to look deeper. I don’t believe Netflix gives credit to writers or cinematographers in their standard interface. As if by magic these shows just appear!
Rating: 6 Votes

I'm all in. I love the weekly releases, and the price makes it a no-brainer. This is where quality > quantity. I am looking at you Netflix.


Just re-subscribed to Netflix to literally only watch Breaking Bad again and El Camino. Once I'm done, I'm cancelling. I had a look around and almost all the content is bad.

mattopotamus
I'm all in. I love the weekly releases, and the price makes it a no-brainer. This is where quality > quantity. I am looking at you Netflix.
Rating: 4 Votes

sakurarain
I will subscribe on day-one. I am looking forward to the SEE
Rating: 3 Votes

Yeah, when Apple starts reporting all those free subscriptions that were included with hardware as services revenue, they'll all look like fools for underestimating the scumbaggery of Apple.


Give me a break. Apple's financial performance speaks for itself and they don't have to resort to anything of the sort.

Besides, the fact subscriptions are included with hardware purchases is well known and only a short duration. We are playing the long game here, so that doesn't matter.
Rating: 3 Votes

I'm shocked that outside of Samsung TVs, there still hasn't been more information or dates announced about the Apple TV app on other smart TVs and devices like Roku. Really thought they'd be rolling it out by now to have more eyes on Apple TV+ when it launches.

Poof! "Roku today announced ('https://www.businesswire.com/news/home/20191015005440/en/Apple-TV-App-Apple-TV-Coming-Roku') that the Apple TV app will be available on its platform starting today..."

Next time could you wish for a MacBook with a decent keyboard and some useful comm ports, please? :)
Rating: 3 Votes

fmcshan
I’m actually quite excited for Apple TV+. I think that the wide variety of shows makes it so that there is something for just about everyone. The low price point of $4.99 a month is lower than Netflix and Disney+ and I think that will help Apple out in the long run. Personally, I’m really looking forward to watching ‘The Morning Show,’ ‘See,’ and ‘Truth Be Told.’ The trailers have been pretty promising thus far.
Rating: 3 Votes