New photos claimed to be of the rumored 6.5-inch "iPhone X Plus" screen and digitizer have been shared on the MacX forums [Google Translate], with the poster claiming the parts come from a "trial run of production equipment" at LG's facilities in Vietnam.

The first photo shows a single digitizer held in a person's hand, and the overall size certainly appears larger than an iPhone X part, while the relative size of the notch to the digitizer's width is slightly different than on the iPhone X. At least one rumor has, however, claimed the second-generation iPhone X could have a smaller notch, so we shouldn't necessarily expect the notch-to-display proportions to be the same between iPhone X generations. 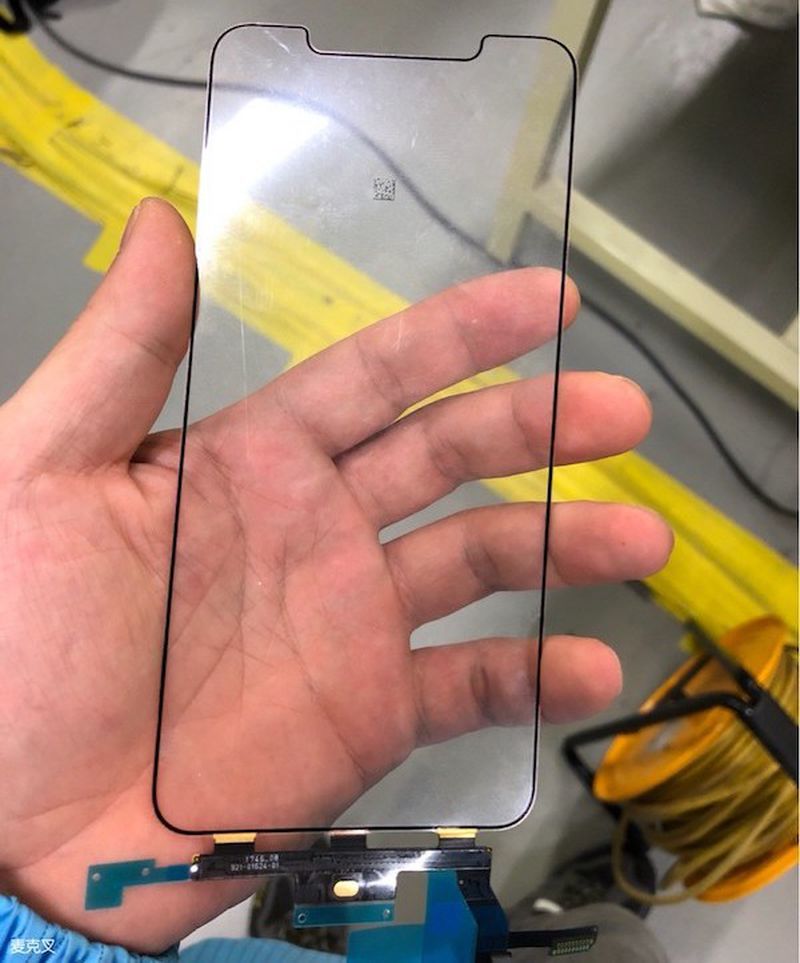 The digitizer includes a flex cable at the bottom of the part for connecting to the iPhone's logic board, and the part number printed on the cable is similar to the format typically used by Apple.

An apparent date code also shown on the flex cable points to a production date in the 46th week of 2017, which would correspond to mid-November, so this isn't a particularly recent part although there could be substantial lag between digitizer production and the part's incorporation into a full display assembly.

The second photo shows a tray containing a set of four assembled display/digitizer components. Again, the size appears larger than the corresponding iPhone X part based on the relative size of the small earpiece slot visible on one of the parts. The rear design of the part is also very similar but not identical to the iPhone X display assembly.

Samsung is the exclusive supplier of OLED displays for the iPhone X, but previous rumors have indicated LG could become the supplier for the so-called iPhone X Plus this year, so the purported location of these photos at LG's plant in Vietnam fits with those rumors. Apple has reportedly invested billions of dollars to help LG get its OLED display production up and running to increase overall supplies and give Apple more flexibility in not needing to rely solely on Samsung.

Apple is rumored to be launching three new iPhones around the usual September timeframe this year: a second-generation iPhone X with the same 5.8-inch OLED display size, a larger "iPhone X Plus" with a 6.5-inch OLED display, and a new LCD-based model with a similar full-face display to the iPhone X design but measuring about 6.1 inches.

Maigrais
Good but I am really smitten with iPhone X. Its size, display quality, speed and camera.
Score: 17 Votes (Like | Disagree)

zahuh
As someone who always purchased a plus model and now has the X, I can’t wait for the X plus!
Score: 15 Votes (Like | Disagree)

jhwalker
IMO, the iPhone X is EXACTLY the right size - no interest in the larger versions.
Score: 13 Votes (Like | Disagree)
Read All Comments

Tuesday April 7, 2020 4:28 am PDT by Tim Hardwick
Two images shared on social media this morning are currently stoking speculation about possible hardware redesigns coming to the iPhone 12 and the potential introduction of Home screen widgets in iOS 14. Shared by Twitter user Fudge (choco_bit), the images depict a front and rear graphical representation of a smartphone with interface elements on the screen, suggesting it came out of a...
Read Full Article • 132 comments

Tuesday April 7, 2020 7:00 am PDT by Eric Slivka
Rumors of Apple-branded over-ear headphones have been circulating for quite some time, while more recent rumors have mentioned an "AirPods Pro Lite" that could also be in the works, and Twitter leaker Jon Prosser's recent foray into Apple rumors provides a bit more detail on what we might able to expect for these products. Current Beats Studio3 Wireless and BeatsX On the over-ear side,...
Read Full Article • 78 comments

Monday April 6, 2020 8:17 am PDT by Joe Rossignol
A sizeable number of Mac users are experiencing occasional system crashes after updating to macOS Catalina version 10.15.4, released a few weeks ago. The crashing issue appears to be most prominent when users attempt to make large file transfers. In a forum post, SoftRAID described the issue as a bug and said that it is working with Apple engineers on a fix for macOS 10.15.5, or a...
Read Full Article • 247 comments

Tuesday April 7, 2020 7:52 am PDT by Eric Slivka
Last week, we laid out evidence suggesting that the just-released iPad Pro models do not contain a U1 Ultra Wideband chip, including the lack of any mention of the chip in tech specs or Apple's press materials, the absence of software support for U1 features, and more. Most tellingly, iFixit was unable to find the chip or related antennas in the device. Daring Fireball's John Gruber has follo...
Read Full Article • 103 comments