LG Display saw its shares surge to a one-month high on Wednesday following a report that the company will begin supplying OLED panels to Apple's new range of iPhones this year (via Financial Times).

LG's stock rallied on an Electronic Times report that the South Korean firm would make over 15 million OLED panels for Apple's 2018 range of iPhones. LG is already a supplier of LCD panels, currently used in the iPhone 8 and iPhone 8 Plus, but Samsung dominates supply of OLED displays for Apple's flagship iPhone X. Indeed, last week LG Display revealed in a regulatory filing that it didn't supply any of the OLED panels currently used in the iPhone X. 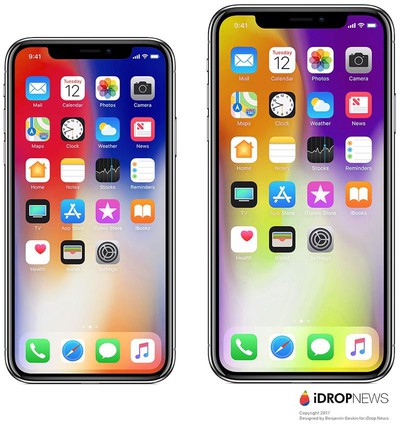 iPhone X Plus mockup by Benjamin Geskin via iDrop News
However, that could change this year, since Apple is expected to launch two new 5.8-inch and 6.5-inch iPhone models with OLED displays in 2018. According to today's report, LG Display will supply Apple with the 6.5-inch OLED panels, while Samsung will supply the 5.8-inch or 6-inch OLED panels.

Reports have been trickling out since July 2017 that Apple has invested billions of dollars in LG's OLED production capability for smartphones, but the fruits of its investment were thought to be some ways off. LG was initially reported to have secured 45,000 panels per month for future iPhones from 2019, while as recently as September it was suggested that Apple would have to wait until at least next year before it could move beyond Samsung for significant supplies of OLED panels. However, Wednesday's report suggests LG could secure its position as the number two supplier of OLED screens for Apple's iPhones as early as the second half of 2018. LG is said to be planning to mass-produce the panels for Apple at its Gen 6 flexible OLED production line located in Paju, South Korea.

LG came in for scrutiny recently after it emerged that the firm supplied Google with the Pixel 2 XL's OLED displays, some of which were reportedly prone to screen burn-in or image retention issues. It remains unclear whether the problems stemmed from LG or other factors were involved, although the smaller Pixel 2 and original Pixel phones – both with Samsung-supplied OLED displays – have experienced far fewer issues. It's also worth noting that Apple says OLED displays can show "slight visual changes" after extended long-term use and minor screen burn-in is considered normal.

The new iPhone X and iPhone X Plus will likely launch around the usual timeframe of September to October, potentially alongside a new 6.1-inch mid-range model with an LCD display.

Quu
LG make great TV panels but their phone OLED's have not got a good reputation at all.
Score: 17 Votes (Like | Disagree)

nviz22
Seeing as LG had issues with the Pixel XL 2 and V30? Not too confident as a consumer.
Score: 13 Votes (Like | Disagree)

GrumpyMom
Google had also made a heavy investment in LG. Some of their display issues had to with how they calibrated the display. But the quality of the panels themselves has been, shall we say, not up to the standard people have been used to from seeing Samsung’s best on the market for the last three years.

The blue shift was really strong on most of the ones I’ve seen, including the one my husband had.

It’s been interesting comparing the Samsung made panels between my iPhone X and that of my husband’s X. They look completely different and have very different characteristics. My display had pure blinding whites with a slight pink cast and no blue shift when tilting the display off axis. My husband’s X has pretty strong blue shift that lends a teal color to the display off axis. But his whites are less harsh and look almost like the soft whites of an e-ink reader.

I am returning my X because reading text on it just kills my eyes after a few minutes. The flicker from pulse width modulation doesn’t affect everyone, but for a few of us it makes the text appear to jitter enough it’s hard to focus on. Still, I can put up with it if the whites of my display weren’t so harsh. Even on the low brightness settings theres a glare like looking at snow in sunlight. I’ll take my husband’s X when he’s ready to pass it down.

I’ve always known since owning my first Samsung phone that there was a variance in the looks and quality of the OLED displays even by the same manufacturer. But this was the biggest variance I’ve seen so far.

I was planning on staying with my IPhone 7 Plus, but if the future is as it is being rumored, I might trade it in for a IPhone 8 Plus to buy myself a little more time with iOS and a really good LCD panel.
Score: 9 Votes (Like | Disagree)

Is LG better than Samsung?

Previous years have shown that they're not better. Queue "is my phone Samsung or LG" posts when the new phone drops.
Score: 9 Votes (Like | Disagree)

otternonsense
Be it LG or Samsung, I instantly lose interest as soon as I see that notch :(
Score: 8 Votes (Like | Disagree)