The newest smartphone ratings from Consumer Reports have been shared this week, and the Samsung Galaxy S8 and Galaxy S8+ have beaten out its smartphone competitors, including Apple's iPhone 7 and iPhone 7 Plus, in categories related to design, battery life, camera, and more. Apple's current generation of iPhone (launched September 2016) is older than the Galaxy S8 family (launched April 2017), so it makes sense that Consumer Reports' ratings would end up favoring the newer devices.

Still, this week's report has some interesting points to make about why the Galaxy S8+ in particular received top marks, and how the upcoming "iPhone 8," as well as the "iPhone 7s" and "iPhone 7s Plus," might address the iPhone 7's shortcomings. Namely, Consumer Reports points out that the Galaxy S8 devices "have no bezels on the side," and only limited bars at the top and bottom. The testers particularly liked the S8's 5.8-inch screen. 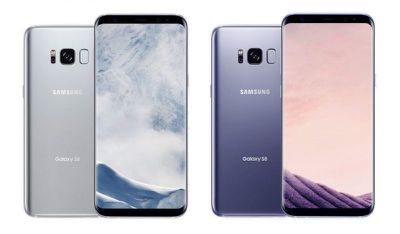 The look of the S8 and S8+ is minimalist, modern, and elegant—and the design allows for a bigger screen in the same-size device.

Those numbers may not sound terribly different, but when you hold either phone in your hand, it feels novel: easy to grasp even if you have a small grip, but with lots of screen real estate. The S8 is 5.8 inches diagonally (that's the way screens are measured), while the S8+ is 6.2 inches.

Richard Fisco, Consumer Reports' lead phone tester, said that the S8 is comfortable to hold, while pointing out that one-handed operation becomes difficult on the devices, particularly the S8+'s 6.2-inch display. Even though the fingerprint scanner on the back of the S8 worked well, the report also described it as "awkwardly placed," explaining that they had to constantly poke around to find it and normally smudged the camera lens while doing so.

Following last year's Galaxy Note7 battery-related issues, Consumer Reports now described the newest Galaxy smartphones as being more reliable and having "some of the best smartphone battery life we've seen," throughout a range of tests related to Wi-Fi, cellular, and talk-time usage. The testers explained that the beefier battery life on the S8+ is the main reason why the larger phone ranks above the smaller S8.

In terms of the camera, Consumer Reports said that the S8's photo-taking abilities produce colors that are rich even in low-light environments, and particularly excels in reducing the over-sharpening produced by the camera. The site also called out the iPhone 7 in this section, and its perceived advantage over the S8 in this category for having a dual rear-facing camera system. Despite the S8 and S8+ lacking this kind of set-up, Consumer Reports doesn't think the Samsung phones are at a disadvantage at all.

Finally, a few top-end cameras, including the iPhone 7 Plus and the LG G6, have dual rear-facing cameras, to enhance either zoom or wide-angle photography. The Samsung phones haven't gone that route yet—and we don't think they suffer for it.

Consumer Reports pointed towards water resistance as an advantage of the S8 line -- up to at least 5 feet of water for around 30 minutes -- while one major disappointment was found in Samsung's smart assistant Bixby. The AI helper hasn't rolled out wide yet, so it makes sense that the early version tested might have been unreliable, with the testers saying that Bixby "just isn't there yet."

Although the Galaxy S8 and S8+ might have won over iPhone 7 and iPhone 7 Plus in these ratings, essentially all of the categories are related to improvements that Apple is rumored to be adding into the 2017 line of iPhones. For Apple's tablet devices, a reduction of bezels and bigger display area have already been seen in the newest iPad Pros that just launched last week during WWDC.

The iPhone 8 specifically is predicted to include greatly reduced bezels, likely with a bar across the top to hold the front-facing camera and other optical sensors, a 5.8-inch OLED screen in a form factor close to the size of the current iPhone 7, Touch ID under the display, a stacked logic board design that will support longer battery life, improved vertically-aligned dual cameras with advanced AR abilities, IP68 waterproofing to rival the Galaxy S8, and an "enhanced Siri."

One of the cons related to the Galaxy S8 and S8+ is the price of Samsung's latest smartphones, starting at around $750 and $850 for 64GB carrier unlocked models, respectively. The iPhone 8 isn't expected to beat Samsung in this category, with rumors pointing towards a premium-priced iPhone that could cost more than $1,000. Some analysts disagree with that price and suggest an iPhone 8 that will have competitive pricing with the Galaxy S8+, potentially selling a 64GB iPhone 8 for $850 to $900 and a higher-end 256GB model for $950 to $1,000.

Red Oak
"Even though the fingerprint scanner on the back of the S8 worked well, the report also described it as "awkwardly placed," explaining that they had to constantly poke around to find it and normally smudged the camera lens while doing so."

And a tent-pole feature, Bixby, is not even working! And they put a button on the phone for it!

And what about all the duplicate carrier and Samsung apps trying to compete with the standard Google apps. What a mess

Rogifan
So a new phone beats out a phone that's due to be updated in 2 months. How is this newsworthy?
Score: 31 Votes (Like | Disagree)

Sunny1990
Galaxy s8 is a fabulous device, Apple better have a good answer to this September.
Score: 30 Votes (Like | Disagree)

supremedesigner
I have no comment on this one. I have lost my trust on Consumer Report. I missed the good ol' Consumer Report back in the 90's...
Score: 28 Votes (Like | Disagree)

User 6502
The funny thing is that the iPhone 8 will be what the iPhone 7 should have been, but one year later and probably overpriced as it's technology all the other manufacturers have been selling for almost a year already at a more reasonable price.
Score: 16 Votes (Like | Disagree)

As a iPhone user since the very beginning, in my opinion, the poor stability of iOS and virtually useless Siri voice recognition sets the bar to beat the iPhone pretty low these days.....

Poor stability of iOS? Can you explain further?
Score: 15 Votes (Like | Disagree)
Read All Comments