Yet another "iPhone 8" design schematic has surfaced today, this one courtesy of noted leaker Sonny Dickson on Twitter. 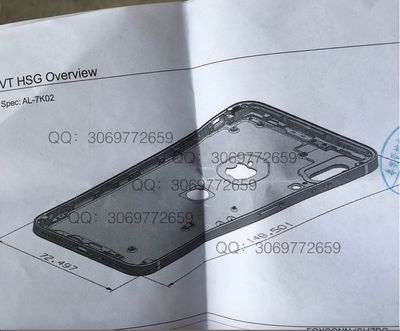 The render shows an iPhone with a vertically-positioned dual-lens camera and Touch ID located on the back of the smartphone, as seen previously. It's likely one of several designs that Apple is considering, as multiple reports have said the company has been testing multiple iPhone prototypes this year.

Bloomberg in particular said one of the iPhone prototypes that Apple is testing has a "simpler design" with an aluminum back, rather than a glass one, plus slightly larger dimensions, and that description is consistent with this render. But, as mentioned, this might not be the design that Apple selects.

Apple suppliers have so far struggled to reliably produce heavily curved glass in mass quantities, so the company is more likely to ship the version with more subdued curves, the person added. The company is also testing a simpler design that has an aluminum back, rather than a glass one, and slightly larger dimensions, one of the people said.

The prototype measures 149.5mm tall and 72.5mm wide, compared to the iPhone 7's 138.3mm length and 67.1mm width, so the "iPhone 8" would be slightly larger than a 4.7-inch iPhone as expected should Apple choose this design. The dimensions are consistent with a previous design schematic leaked last week.

While a vertical camera is a more likely possibility for what will be Apple's highest-end iPhone, it's less clear if Touch ID will be integrated under the display, on the rear, or elsewhere. Last week, Cowen and Company analyst Timothy Arcuri said Apple is facing yield issues with its under-display solution.

One possibility is that the circular cutout on the rear is actually for wireless charging, rather than Touch ID, in order to avoid interference from the aluminum casing. KGI Securities analyst Ming-Chi Kuo said all three iPhone models rumored to launch this year will feature wireless charging.

The sides of the iPhone include the usual cutouts for the mute switch, SIM card tray, Lightning connector, speaker grille, and what is likely a second faux speaker grille. In line with the iPhone 7, there is no 3.5mm headphone jack, so don't get your hopes up about a surprise return of the legacy connector.

morcutt11
Sorry Apple, but it is definitely a "NO" if touch ID is on the back. I've used Android phones that are like that and it is a pain.

I'm hoping that Apple is just trying to flood the market with false specs of different variations to keep people guessing right up to the official announcement.

I'd love to see Tim Cook come out and show the fingerprint sensor working underneath a bezel-less display and say, "What? You didn't think we were going to put it on the back did you?"
Score: 80 Votes (Like | Disagree)

penajmz
No Touch ID on the back please
Score: 49 Votes (Like | Disagree)

TurboPGT!
I can promise you, Touch ID will not be on the back.
Score: 47 Votes (Like | Disagree)

kissmo
TouchID on the back. YUCK!
Score: 46 Votes (Like | Disagree)

I can promise you, Touch ID will not be on the back.

I hope that hole in the back is for something else....

Sunday May 15, 2022 6:14 am PDT by Sami Fathi
iOS 16 will include new ways of interacting with the system and some "fresh Apple apps," Bloomberg's Mark Gurman has said, offering some more detail on what Apple has in store for the upcoming release of iOS and iPadOS set to be announced in a few weeks at WWDC. In the latest edition of his Power On newsletter, Gurman wrote that while iOS 16 is not likely to introduce a major face-lift to...
Read Full Article • 225 comments