The same shortage phenomenon occurred last summer, ahead of the new bands that launched in September. While hardware updates have been less frequent, Apple has kept new band lineups on a seasonal release cycle approximately every six months, solidifying the Apple Watch as an ever-changing fashion accessory in the company's eye. Since the original Apple Watch launched, there have been four seasonal collections: Spring 2015, Fall 2015, Spring 2016, and Fall 2016. New bands potentially arriving in the next few weeks would mark the first band collection of 2017. 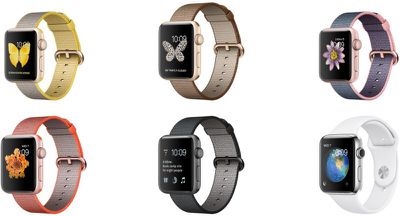 Tracked on the U.S. Apple.com store, the largest shortages for Apple Watch Series 2 bundles are mainly for models with Woven Nylon bands. Of the six Series 2 models that include Woven Nylon bands, five have models that are listed as "Sold Out" on Apple.com and in the Apple Store iOS app. Conversely, all aluminum Apple Watch Series 1 and Series 2 models with Sport Bands were available to buy at the time of writing.

Out-of-stock Apple Watch Bands are far less numerous than they were last summer, ahead of the Series 2's introduction in the fall. In June, MacRumors reported upwards of 35 different Apple Watch bands marked as "Sold Out" on Apple.com; today, just five bands are unavailable. In both 38mm and 42mm Classic Buckle, the Sea Blue, Midnight Blue, and Red colorways are sold out, while in the 38mm Modern Buckle, the Midnight Blue and Black options are currently unavailable.

That leaves a plethora of other Apple Watch bands on the store for users to purchase, including every Sport Band and Woven Nylon Band. Some bands available have lengthy shipping estimates, like the Midnight Blue Leather Loop's 6-8 week delivery window, but most will arrive in the mail with Apple's usual 1 day speedy delivery, and up to 2 days for free shipping.

Apple Watch stock shortages aren't terribly uncommon, with some bundles and bands occasionally selling out months ahead of a refresh, but given Apple's commitment to timely band releases and the number of models currently out of stock it's likely that the company will introduce a similar refresh of Apple Watch bundles and bands in the coming weeks. The Spring 2017 collection could also see the launch of an all-new band material, similar to the debut of Woven Nylon a year ago next month, although no specific rumors about new materials have surfaced.

A full hardware refresh isn't expected until later in the year, perhaps alongside the iPhone 8 in the fall, but it's not yet clear if it will mark the Apple Watch's first major design overhaul or another evolution of the basic design profile that debuted in 2015. Rumors have suggested the third-generation Apple Watch will put a focus on improving battery life and performance and may not feature other major changes.

mudflap
90% of you people need to fill your pockets with wrenches and just walk into the ocean. Bunch of self-entitled whining brats. If you spent 1/10 of your snark energy on actual productive, critical thought, MacRumors forums would be a lovely place. Like it used to be. Also get off my lawn.
Score: 30 Votes (Like | Disagree)

Obviously this company is AMAZZZINGGGG... just look at it's stock price, end of story!!! :D

Appleaker
It's always lovely to have a new $100+ watch band rather than new Macs.... who needs to buy a PC anyway?
Score: 23 Votes (Like | Disagree)

aaronhead14
Can't Apple just go back to being a professional-end computer company rather than a fashion/cellular telephone company? I'm so sick of Apple these days.... #BringBackMacPro
Score: 21 Votes (Like | Disagree)

Friday January 21, 2022 6:11 am PST by Hartley Charlton
Following months of bleak news about Peloton's "precarious state," including the revelation that it has halted production of its bikes and treadmills, Apple is being floated as a potential buyer of Peloton's troubled fitness business. Yesterday, CNBC reported that Peloton will temporarily stop production of its connected fitness products due to a "significant reduction" in consumer demand, a ...
Read Full Article • 342 comments

Sunday January 23, 2022 2:59 am PST by Tim Hardwick
Apple has always emphasized the depth of thought that goes into the design of its products. In the foreword to Designed by Apple in California, a photo book released by the company in 2016, Jony Ive explains how Apple strives "to define objects that appear effortless" and "so simple, coherent and inevitable that there could be no rational alternative." But every once in a while even Apple...
Read Full Article • 393 comments

Sunday January 23, 2022 10:32 am PST by Juli Clover
Apple is working on a number of new products that are set to launch this fall, and Bloomberg's Mark Gurman says that it will be "the widest array" of new devices that Apple has introduced in its history. In his latest "Power On" newsletter, Gurman explains that Apple is working on four new flagship iPhones (iPhone 14, iPhone 14 Max, iPhone 14 Pro, and iPhone 14 Pro Max), an updated low-end Ma...
Read Full Article • 220 comments