At Apple's March 2016 event today in its Cupertino headquarters, the company announced a brand new band material for its Apple Watch: woven nylon. Apple also announced several new colors for other Apple Watch bands, including a black Milanese Loop. The Apple Watch will also see a price drop, with the Apple Watch Sport now starting at $299. 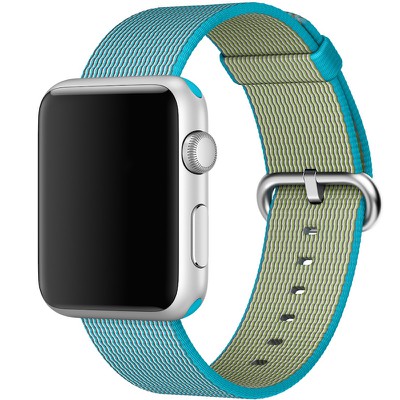 The new woven nylon bands, which are the signature addition to the new "spring collection" of Apple Watch bands, are priced at $49 and come in 7 colors: Gold / Red, Gold / Royal Blue, Royal Blue, Pink, Pearl, Scuba Blue and Black.

dsburdette
I'm interested in an Apple watch at a price point of about $99-$129. As someone who abandoned watches a long time ago, I just cannot get excited at all. That's not speaking against the array of features it has, but more that I'm completely disinterested in this category.
Score: 6 Votes (Like | Disagree)

Big price drop..
Sales must be lower than they expected/want.

They sold for that much around Xmas. They just have room to discount and are taking advantage of that to drive more sales before they roll out an upgrade.
Score: 6 Votes (Like | Disagree)

cloudness
Just finished browsing the updated Apple Store (nylon bands are priced as sport bands) and getting increasingly frustrated by lack of options for black watches.
Score: 4 Votes (Like | Disagree)

It doesn't help Apple's image either. Other than the original iPhone (which was a brand new market category for the entire cell phone industry - which the watch is not), I don't think Apple has ever dropped the price on a product less than a year old without releasing a new one to take its place.

Those who owned smartphones before Apple came out with the iPhone (and who argued to anyone who would listen, that the iPhone wasn't even very "smart") will take exception to your assertion that the smart phone category was created by Apple, while the smart watch category was already mature.

Or were you talking about some other category? If so, what is that category called in the industry press?

In what ways does lowering the price on the year-old Apple Watch damage your personal opinion of Apple?
Score: 3 Votes (Like | Disagree)

nburwell
I'd have to see these bands in person before I pass judgment. However at first look, I'm not really a fan.

FYI, Best Buy and Target have the AW starting at $249 for the sport model. I picked the rose gold sport model up for my girlfriend for her birthday yesterday.
Score: 3 Votes (Like | Disagree)
Read All Comments