Japanese magazine Mac Fan has published some possible schematics depicting the design of the larger-screened "iPad Pro" or "iPad Air Plus" in its January issue, which have been shared by Mac Otakara [Google Translate] along with some information about the upcoming device.

The schematics suggest the tablet will include a 12.2-inch LCD display, and it points towards dimensions of 305.31mm x 220.8mm x 7mm, or 12 inches x 8.7 inches x 0.28 inches, which is in line with previous rumors about the larger tablet. Many rumors have suggested a size of 12.9-inches for the larger tablet, but this is the second report from Mac Otakara that has suggested the device will have a 12.2-inch display. 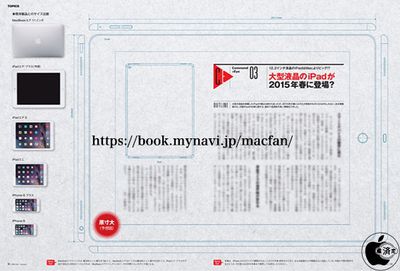 Along with an upgraded processor, the tablet is said to have dual top and bottom speakers to allow for improved stereo audio, and design wise, the iPad Pro may look similar to the existing iPad Air 2 and the iPad mini.

Mac Fan also believes that Apple is working on an iPad mini 4, which will be equipped with the same A8X processor found in the iPad Air 2 and a thinner design that more closely resembles Apple's latest iPad Air. With the launch of the iPad mini 4, Mac Fan says both the iPad mini and the iPad mini 3 will be discontinued.

According to the report, both of these tablets may launch between April and June of 2015, which is in line with previous iPad Pro rumors. Earlier this month, reliable KGI Securities analyst Ming-Chi Kuo suggested the iPad Pro may not enter mass production until the second quarter of 2015, following rumors that Apple had pushed back production to focus its attention on improving iPhone 6 Plus supply.

sualpine
Let me guess... Another row of icons?
Score: 40 Votes (Like | Disagree)

Okay, bye. Because that will never happen. You'll get iOS apps with desktop-level features eventually (some apps already have them) — and a bigger display will help enable that. But touch UIs and mouse UIs are fundamentally incompatible.
Score: 29 Votes (Like | Disagree)

This just in - Apple reinvents the calendar!
Score: 16 Votes (Like | Disagree)

So the iPad Pro will just be a larger iPad?

Hopefully it'll have Wacom-level pressure sensitivity, too. I'd like to use one instead of a Cintiq… but I wouldn't hold my breath for that.
Score: 15 Votes (Like | Disagree)