VentureBeat today posted a detailed overview of features that are said to be built into Apple's upcoming iPhone 6, with the outline provided by an unspecified source. While many of the proffered specifications in VentureBeat's outline echo past rumors, there are a few new specific details worth highlighting. 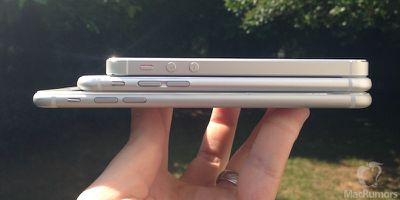 iPhone 5s with mockups of 4.7-inch and 5.5-inch iPhone 6 models
Feature wise, VentureBeat points towards a new 2.0GHz A8 chip, NFC capabilities, and 802.11ac WiFi, all of which have been mentioned in previous rumors as possible specifications for the iPhone 6. The site does get into some specifics, however, suggesting the device will use Qualcomm's MDM9x35 cellular modem along with an NFC chip made by NXP and a WiFi chip from Broadcom.

Apple's Touch ID fingerprint sensor is said to include minor improvements that "speed up read times, cut down on false rejections, and improve security for mobile payments and biometrics," and the source suggests the iPhone 6 will not use a sapphire screen.

We've also heard rumors that the new screens will be made of ultra-durable sapphire glass. Our source says the screens are made of an extremely hard material that's slightly harder than Gorilla Glass but not as hard as sapphire. That corroborates an earlier video report showing that the purported iPhone 6 screen is harder than previous models' screens but softer than sapphire crystal.

While a front panel said to be for the 4.7-inch iPhone has undergone some testing that suggests it may not be composed of sapphire, many rumors have pointed towards the use of a pure sapphire crystal display or sapphire laminated glass display in at least one of the iPhone 6 models. The volume of sapphire production at Apple's Arizona sapphire plant run by GT Advanced also points towards the heavy use of the material and it is unlikely that all of the company's sapphire is being allocated towards the iWatch. During Q2 2014 alone, GT Advanced spent over $45 million on "sapphire production ramp up costs", and previous rumors have suggested the plant can output enough sapphire to outfit approximately 100 to 200 million iPhones.

In addition to outlining possible features for the iPhone 6, VentureBeat also suggests that Apple is experimenting with special connectivity between the iPhone and Beats headphones using the Lightning connector. Apple did recently introduce a Lightning Cable MFi specification for headphones, making such a project a possibility.

Our source adds that Apple has also been playing around with some technology that would form a special "handshake" between iPhones and Beats headphones. This consists of a chip that would authenticate Beats headsets on iPhones using the Lightning connector. Whether or not that feature materializes is anybody's guess.

VentureBeat's sources have not been particularly reliable in the past. For example, the site recently suggested Apple was pairing up with Swatch to develop the iWatch, a rumor that was quickly shot down by Swatch CEO Nick Hayek. The site's source also "stresses" that the listed features may not be the "final spec list" for the iPhone 6, so the overall reliability of the provided information is unclear.

lincolntran
At this point, I don't give a rat ass about iPhone 6 rumors. They're all sketchy at best. Nobody knows anything for sure this time. :apple:
Score: 28 Votes (Like | Disagree)

Dilster3k
No sapphire, actually a bit of sapphire, some with some without, no no sapphire is happening... maybe? NFC no, no chance, but actually yes but no.

Guys we have a month left just chill out. :cool:
Score: 26 Votes (Like | Disagree)

xVeinx
Seems like this is been kept under wraps pretty well if no one can figure out if Sapphire is being used or not...
Score: 18 Votes (Like | Disagree)

I bought a 4.7 inch smartphone with NFC and without sapphire glass in 2011.


Congratulations. I hope you keep it and skip the iPhone 6.
Score: 16 Votes (Like | Disagree)
Read All Comments