According to 9to5Mac, Apple is putting the finishing touches on iOS 8 in advance of a September iPhone and iOS 8 launch event. Based on current projections, Apple is unsurprisingly tentatively planning to hold this iPhone-oriented event in mid-September. In line with previous reports, Apple is said to be aiming for a second product launch event in October for the iWatch and OS X Yosemite. 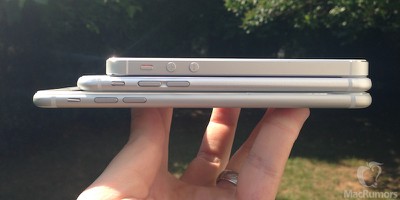 These people say that the second and third weeks of September are the mostly likely weeks for the event to be held, but they add that manufacturing uncertainties could alter the event’s timeframe. A decision has not been finalized, and sources made it clear that the plans are in flux.

This information aligns with an earlier report that suggests Apple may push off the 5.5-inch model until 2015.

The report claims iOS 8 is on track for its public release this fall, with a fifth and final beta version expected on Monday, August 4, although a separate report from BGR claims a sixth beta is planned for Friday, August 15. A golden master version may debut a few weeks later at the end of August or early September. As rumored, dual-screen multi-tasking for the iPad and Maps improvements are still in the works, but these features are not expected to be available at launch and would come in a later iOS 8 update.

Following the September event, Apple also is planning a second event in October that will showcase the iWatch, Apple's entry into the wearables market. This late fall event also will be used to discuss OS X Yosemite as well as unveil new iPad models. The iPad update is expected to be a modest refresh with hardware additions such as Touch ID and a faster A8 processor.

Would be nice to see a major AppleTV revamp too...
Score: 19 Votes (Like | Disagree)

SilianRail
A moment of silence for AT&T's servers...those poor bastards don't have a chance.
Score: 12 Votes (Like | Disagree)

maflynn
I'm more interested in the larger iPhone - so I have to hold my breath and wait :(
Score: 11 Votes (Like | Disagree)

"One more thing" was Steve's thing... and it hasn't been used since before he passed away.


I think enough time has passed that Tim could actually pull off Steve's "one more thing..." bit. Could be a very classy nod to his predecessor. Can you imagine the roar of approval form the crowd? I think there would be a full 60-seconds of applause. Maybe a standing O. I can already see the respectful grin stretched across Tim's face. But once the faithful finally calmed down, said "one more thing" better deliver. ;)

Regardless, I'd like to see Tim use that line. I think somewhere, Steve would be grinning. As would those not so far up the ridiculous "Tim's not Steve" tree, would too. Clearly, Tim seems to be patiently and intentionally establishing his own Apple. All with the careful, calculated respect you hope would come form the guy that followed The Guy. No small task. Stay the course, Tim. #support
Score: 8 Votes (Like | Disagree)

Would be nice to see a major AppleTV revamp too...

ghost187
Honestly, if the 5.5 is really "real" and Apple does not announce it with the 4.7" version, than don't bother holding off for it because you will wait at least a year.

I suspect that Apple will release it along with the iPhone 6S next year and call it iPhone 6A. I highly doubt Apple will screw it's customers over after 2-3 months and release a 5.5" iPhone without at least announcing them simultaneously together.
Score: 5 Votes (Like | Disagree)
Read All Comments