As it was during last year's Consumer Electronics Show, wearable technology, in the form of a variety of smart watches, fitness trackers and even smart glasses, will be a major focus of CES 2014, which is slated to begin next week.

This year, CES will feature an all new TechZone exhibit called "WristRevolution," featuring smart watches (both already released and upcoming) from a wide array of companies highlighted by PCWorld, including Kronoz, Cookoo, Sonostar, Metawatch, Archos, Burg, and Pine. Major companies like Qualcomm and Sony will also exhibit smart watches, as will seasoned veteran Pebble. 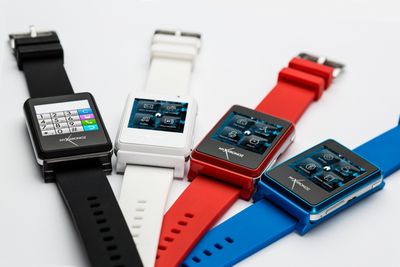 Kronoz ZeNano
Some of the watches, like the Cookoo, offer notifications and more bundled in a standard watch style design, while other products, like the Sonostar, carry a more futuristic wraparound design. Some, like the Kronoz, allow users to answer calls directly on their wrists, and others, like the Pine, also include biometric sensors for measuring heart rate.

Witness the unveiling of next generation tech wearables. The all-new WristRevolution TechZone at the 2014 CES is where style, sensors and connectivity intersect. From customizable and downloadable watch faces to internet-connectivity and app-based programs, the standard wristwatch transforms into a GPS, music player, health monitor, alert and message indicator and more. The WristRevolution TechZone will showcase the latest developments and discoveries for the next wave of advancement for this pocket-sized tech.

Smart watches have soared in popularity over the course of 2013, following the release of the Pebble Smart Watch and an onslaught of rumors about Apple's smart "iWatch," inspiring companies like Samsung to launch their own smart watch offerings.

Along with smart watches, wearable activity trackers like the Fitbit, the Jawbone UP, and the Nike FuelBand are expected to be a popular exhibition category at CES. The show will see old favorites from companies like Fitbit and Basis, showing off their newest offerings the Fitbit Force and the Carbon Steel Basis Tracker, respectively, as well as newer devices like the Lifeband Touch from LG.

Spurred by the popularity of Google Glass, several companies will show off smart glasses, with Epson, Vuzix, GlassUp, and more exhibiting various smart eyewear products. GlassUp, like Google Glass, is designed to allow wearers to view incoming notifications like emails, text messages, app updates, and more, but it is far more simple than Google Glass, lacking key features like a camera.

Wearables that don't fall into other categories, like the MYO armband, will be exhibited as well. First introduced last year, the MYO armband is designed to detect motion and muscle movements, allowing its users to control a Mac, PC, or other device through gestures. The Kiwi Move, a small motion-tracking dongle, works similarly to an activity tracker but can be worn anywhere, while the Lumo is a back brace designed to sense and correct posture. Intel has also promised to unveil some non-specific "innovative wearables" during CES.

Wearable technology will also veer into some radical new arenas at CES, with i4c debuting VOYCE, a wearable monitor designed for dogs. The collar, which includes a number of biometric sensors, measures vital signs.


In addition to the above mentioned products, many other wearable surprises are expected to debut at CES this year, skyrocketing wearable technology to a new level of popularity. CES 2014 will take place from Tuesday, January 7 to Friday, January 10 in Las Vegas.
[ 88 comments ]

Lord Hamsa
Based on the examples shown to date, is it an industry requirement that "smartwatches" be butt ugly?
Score: 11 Votes (Like | Disagree)

err404
I thought the trend was overhype, until I got a Pebble for xmas. I must say that it is amazing. Very good battery life (~1 week), always on display, and any iOS notification integrates seamlessly. Between the immediate feedback when my phone is buzzing and the control over functions like music playback, it has drastically reduced the number of times I need to fish my phone out of my pocket.
It also has many handy features like being able to play a chime from my phone when I misplace it, or notifying me if I accidentally leave my phone behind at a restaurant.
Sure it would be nice to see it slimmed down and built with high grade components, but functionally Pebble is the right idea. It runs a very lightweight OS to limit battery usage and relies on your phone for any heavy lifting.
A smartwatch is not standalone device, it is a companion to your phone, and they do improve a modern lifestyle through separating your phone from your hand while not separating you from your information.
Score: 4 Votes (Like | Disagree)

newyorksole
Still don't see the appeal in the glasses or the watches...
Score: 4 Votes (Like | Disagree)

Stella
Wearable technology is the future.

People once thought "whats the point of an iPod or smartphone".. the same will be for smart watches, smart glasses et al. All Very Cool.

There will be a lot of competition, some utter crap and a few winners which will become mainstream.

Wrist devices depending on features or functionality, could become interesting, Google Glass, has never been popular, never ever will be.

Google Glasses is far too new to make any assumption about its success. First, the price is high, and second, limited availability. If Google Glasses isn't a success, future alternatives will be.
Score: 3 Votes (Like | Disagree)

Still don't see the appeal in the glasses or the watches...

gatearray
This all sounds like just more garbage for the landfill and lots of answers to questions no one asked.
Score: 3 Votes (Like | Disagree)
Read All Comments

Friday December 2, 2022 10:54 am PST by Juli Clover
Google is continuing on with its attempt to convince Apple to adopt the RCS messaging standard, publishing a new "it's time for RCS" blog post. Promoted heavily by Google, RCS or Rich Communication Services is a messaging standard that is designed to replace the current SMS messaging standard. It provides support for higher resolution photos and videos, audio messages, and bigger file sizes, ...
Read Full Article • 624 comments

Monday December 5, 2022 11:44 am PST by Juli Clover
Due to production issues at Apple supplier factories in China, the iPhone 14 Pro and iPhone 14 Pro Max are backordered and basically out of stock at every store. If you were planning to gift or receive an iPhone 14 Pro model for the holidays and didn't already get one, you're basically out of luck because they're gone until late December. Subscribe to the MacRumors YouTube channel for more ...
Read Full Article • 160 comments