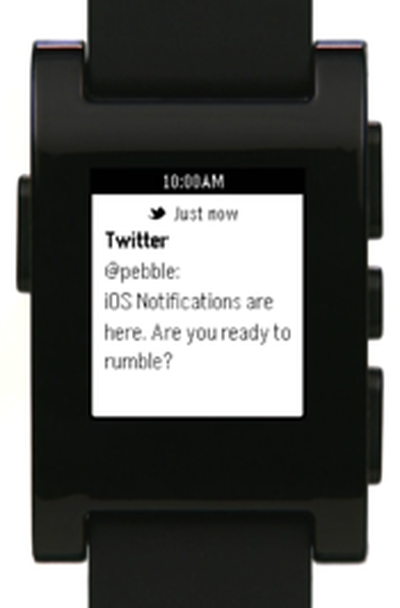 Pebble today announced a significant update to its smart watch that allows any Notification Center alert to be pushed directly to the watch, a big improvement from the prior version which only allowed some notifications like calls and text messages to be sent.

Now, any iOS 7 notification -- whether from Facebook, Google Maps, Calendar or any other app -- will appear directly on the Pebble Smart Watch. The company also announced the next major version of the Pebble SDK for developers, including new APIs for Javascript, the accelerometer, data logging and persistent storage.

A new Pebble app for iOS will enable this functionality and is currently under review by Apple. Expect an update on the iTunes Store soon. Pebble is streaming the announcement live at 10AM Pacific so developers can see the latest updates.

First, we're introducing a delightful user experience for Pebble customers using iOS. Pebble is now fully integrated with iOS 7 and works seamlessly with Notification Center. This means that any notifications that you've enabled in Notification Center on your iOS 7 device will appear on your Pebble -- just like that. It's easier than ever to pick and choose which updates you want to see on your watch. This includes notifications beyond calls, texts and emails, such as Calendar, Twitter, Facebook, Google+, Instagram, LinkedIn, Flickr, Dropbox, WhatsApp, Flipboard and more.


The Pebble raised more than $10 million on Kickstarter, potentially proving the viability of the smart watch as a product. Apple is widely rumored to be working on its own iWatch and recently invested hundreds of millions of dollars in a new Arizona factory to make sapphire glass, perhaps for such a product.

Pebble says it has native apps from Foursquare, GoPro and Yelp on the way, with more to come. The Pebble smart watch is available for $150 in five colors from getpebble.com and at Best Buy and AT&T retail stores.

cool, but I think I'd rather just look at notifications on the retina display.

When you're skiing? It'll be awesome on the slopes when I can glance at my watch for text messages my friends send from the lodge to meet up.

There are many situations (skiing, jogging, hiking, rowing a boat, in a noisy concert) where your phone is in your pocket and you can't get to it easily (or hear the vibrations) and seeing notifications on your wrist is so much easier.
Score: 12 Votes (Like | Disagree)

mysticbluebmw
Subjective as it may be, that's one fugly watch.
Score: 9 Votes (Like | Disagree)

MozMan68
...but it still looks the way it looks.

Counting on Apple to have all of this and some serious style as well.
Score: 9 Votes (Like | Disagree)

staveb
Who knows when it will come out, but I'm waiting for the official Apple iWatch. That said, because of owning an iPhone, I haven't worn a watch for years now and enjoy having my wrist nude!
Score: 9 Votes (Like | Disagree)

I would get a Pebble, but I just got this last week, instead.


we're all very happy for you
Score: 8 Votes (Like | Disagree)

Chupa Chupa
I kind of feel bad for the Pebble guys. They are doing all this advance work for Apple and then they are going to get demolished the second the Apple watch is announced. I hope they are keeping some of the profits for themselves and not putting every dime backing into the company. They'll need it.
Score: 8 Votes (Like | Disagree)
Read All Comments