Earlier this week, we reported that Apple CEO Tim Cook has shown up in Beijing, posing for photos with customers at the company's Xidan Joy City retail store as part of a trip to meet with unspecified "Chinese officials" as disclosed by an Apple spokesperson.

Over the past several days, media reports have revealed that Cook has been meeting with several government officials in China, with IDG News Service reporting yesterday that Cook had met with Beijing mayor Guo Jinlong to discuss further cooperation.

Beijing mayor Guo Jinlong, who met Cook on Monday afternoon, said he hoped Apple and Beijing could take further steps to deepen the company’s cooperation with the capital. Beijing’s top schools, rich talent, and market potential, makes the city ideal to develop the IT industry, he added.

The brief report from the Beijing Daily did not elaborate more on Apple’s cooperation with Beijing. 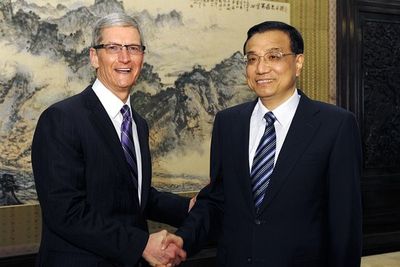 Apple Inc. Chief Executive Tim Cook met with Chinese Vice Premier Li Keqiang to discuss intellectual-property issues and greater cooperation, according to state media report. It was the strongest signal yet that the company is strengthening ties in a market it long neglected.

The executive met with Mr. Li, who is expected to be named premier next year, on Tuesday, state radio and television reported. "China will create a good environment for and strengthen the protection of intellectual-property rights for fair competition among various enterprises including foreign and domestic ones, according to the Chinese law," Mr. Li said, according to Wednesday's report.

With intellectual property issues being one of the highlighted topics of discussion between Cook and Li, it seems likely that the two addressed the ongoing iPad trademark dispute that has seen Proview seeking up to $2 billion from Apple in exchange for the Chinese rights to the name. Apple claims that it already legally acquired the trademark in a broader rights deal and that Proview and its subsidiaries are colluding to extort considerably more money from Apple for the Chinese rights.

Update: Sources have indicated to AllThingsD that Cook also met with executives at China Mobile, the world's largest carrier. Apple has yet to launch the iPhone on the carrier, likely due at least in part due to the need for specialized hardware to run on its 3G network.

Sources say Cook visited China Mobile’s Beijing offices, and while they offered no details beyond that, it’s not much of a leap to conclude that he was there to talk about the iPhone, which is currently offered by China Mobile rivals China Unicom and China Telecom.

Apple and China Mobile have been in discussions for several years, and Cook was seen at the carrier's headquarters last June, but no deal has yet been struck.

Sorry but steve would have been wearing turtle neck and Jeans ... thats what made him so cool.


Tim Cook is not Steve Jobs. I prefer him to be his own person rather than trying to be Steve.
Score: 41 Votes (Like | Disagree)

Good for him. Steve would never suit up. 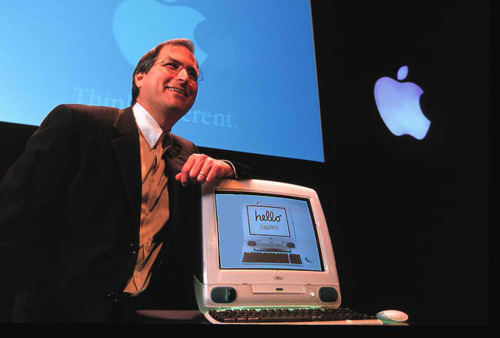 I miss Steve. There's something fishy about Tim Cook.


True! He probably ate Sushi before the photo.

Tim's looking sharp, and the Mayor opened his eyes big and wide.

To many people, Steve Jobs was Apple, and Apple was Steve Jobs.
It's a very difficult concept to change, so anything Tim does is throughly scrutinized and compared to 'what would Steve have done instead'.

At the same time, he's trying to be himself, and not a copy of Steve Jobs.
I'm sure he wants to be respected and remembered for who he is and how he did things after Steve's passing.
I just hope he continues making the right decisions.
Score: 13 Votes (Like | Disagree)

JayLenochiniMac
Good for him. Steve would never suit up.
Score: 11 Votes (Like | Disagree)
Read All Comments

Friday December 2, 2022 10:54 am PST by Juli Clover
Google is continuing on with its attempt to convince Apple to adopt the RCS messaging standard, publishing a new "it's time for RCS" blog post. Promoted heavily by Google, RCS or Rich Communication Services is a messaging standard that is designed to replace the current SMS messaging standard. It provides support for higher resolution photos and videos, audio messages, and bigger file sizes, ...
Read Full Article • 646 comments