Apple and Proview Face Off in Shanghai Court Over iPad Trademark

While Proview has had some success in its battle against Apple's use of the "iPad" trademark in China with minor court decisions against local retailers, the two companies are now going directly head-to-head in a higher-profile case underway in Shanghai. There has been no decision in the case yet, but lawyers for both sides spent four hours today laying out their evidence for the presiding judge. Reuters notes that Apple has gone on the offensive by citing the impact on the Chinese economy if iPad sales were to be halted, given the iPad's massive popularity and Proview's current lack of any product offering under that name.

"Proview has no product, no markets, no customers and no suppliers. It has nothing," Hu Jinnan, a partner at Guangdong Shendadi law firm, which is representing Apple in the case, told the court.

"Apple has huge sales in China. Its fans line up to buy Apple products. The ban, if executed, would not only hurt Apple sales but it would also hurt China's national interest."

Apple's tactics of highlighting the economic impact of the iPad and calling into question the validity of Proview's trademark given a lack of physical product using the name are side arguments to its primary claims, which hold that Proview agreed to transfer the rights to an Apple-held company in late 2009 and has failed to uphold its part of the deal. 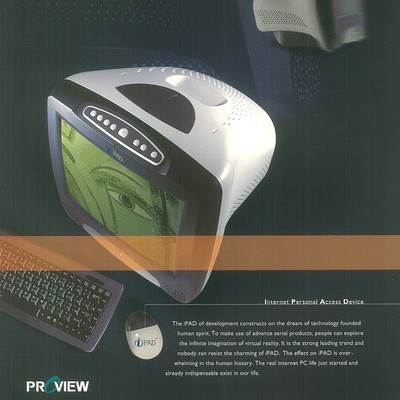 Proview's iPAD, sold from 1998 until 2009 (Source: The Wall Street Journal)
A Hong Kong court sided with Apple last year, ruling that Proview and its subsidiaries had colluded to extort significant sums of money from Apple in refusing to hand over the Chinese rights to the trademark. But Apple needs to convince courts in mainland China to adopt the same view as it seeks to thwart Proview's attempts at halting iPad sales and its requests for as much as $2 billion in compensation. Proview has argued that the Hong Kong ruling is inadmissible in Chinese courts, although Apple could presumably submit the same primary evidence to the Chinese court that it did in the Hong Kong case, seeking to convince the Chinese judge to independently come to the same conclusion.
Related Roundup: iPad
Tags: China, Proview Technology
Buyer's Guide: iPad (Neutral)
Related Forum: iPad
[ 109 comments ]

I agree. I don't know why Apple thinks that Proview DOESN'T have the trademark right. Just because Apple is a corporate monster doesn't mean that they don't have to adhere to the same trademark laws as everyone else. Proview's compensation request is outrageous of course, but I would think their rights to that name in China is undisputed.


Maybe beause Apple bought the world rights to the term iPad from them?
Score: 23 Votes (Like | Disagree)

Apple would be quick to go after anyone using their trademarks so it is only fair that Apple are stopped from trampling over an exiting product with the ipad name.


Unless they really did sell the rights to Apple, and ProView is just pissed bacause they didn't know it was Apple buying the rights and are just trying to get more money now...
Score: 17 Votes (Like | Disagree)

zorinlynx
You are all missing the point. It doesn't matter how popular the iPad is or that Proview doesn't sell that product anymore.

What matters is that Proview sold rights to the iPad name to Apple years ago, and now that the iPad is immensely popular, has turned around and claimed they didn't really sell it, or that a mistake was made.

I'm sorry Proview, but you made your bed by selling the trademark. Now lie in it, and go away. Perhaps you should have charged Apple more for the rights.

I don't like to side with Apple on these things, as they are usually the trademark/patent bullies... But I'm trying to be fair. They bought the rights fair and clear.
Score: 12 Votes (Like | Disagree)

I agree. I don't know why Apple thinks that Proview DOESN'T have the trademark right. Just because Apple is a corporate monster doesn't mean that they don't have to adhere to the same trademark laws as everyone else. Proview's compensation request is outrageous of course, but I would think their rights to that name in China is undisputed.


Apple thinks that Proview doesn't have the rights because Proview sold the trademark right to Apple. I think that is a pretty good argument. Has nothing to do with company sizes, it has to do with Apple and Proview signing a contract, and Apple handing over the money.

Proview has no product, no markets, no customers and no suppliers. It has nothing.

This is the truth, and frankly it's the problem with IP laws. A lack of common sense.
Score: 10 Votes (Like | Disagree)
Read All Comments

Thursday May 13, 2021 12:10 am PDT by Sami Fathi
Apple has fired Antonio García Martínez, an ex-Facebook product manager and author of the controversial book "Chaos Monkeys," following public and internal calls for removal and investigation due to past misogynistic statements, The Verge reports. Apple hired Martínez earlier this week to join its ads team, however, comments that Martínez made in the past sparked condemnation from users...
Read Full Article • 266 comments