Late last month, Apple launched the iTunes Music Store in 12 new European countries, with the updated terms and conditions for users in those countries also addressing movie and TV show content despite those options not being made available in the new countries.

It now appears that Apple has begun rolling out iTunes Store movie content in a number of these and other countries, marking yet another substantial international expansion to Apple's content catalog. 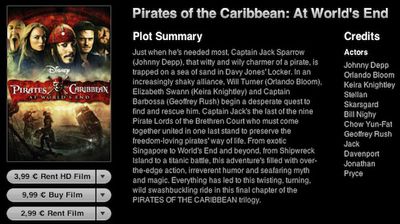 Movie listing from Estonian iTunes Store
Based on reports from readers and an examination of the iTunes Store, it appears that movies are now available in Bulgaria, Cyprus, Czech Republic, Estonia, Hungary, Latvia, Lithuania, Malta, Poland, and Slovakia, and Slovenia – all countries that had been included in the latest round of music store expansion. Curiously, the Romanian iTunes Store appears to be the only one of the twelve recent music additions to have not yet received movie content.

Earlier this week we also received a couple of reports of movies becoming available in Greece and Portugal, two countries that have had music store access since 2004, suggesting that the movie expansion may be even broader.

As has been in the case with other similar content expansions, Apple has not yet launched dedicated navigation bar tabs in iTunes for movies in the new countries, but the content is showing up in search results.

Wow, I should move to Estonia, they get it in English there.

I seem to be stuck with German here in Switzerland.


This is a thing I don't understand.

Why they don't put the movies or tv shows with multiple tracks and subtitles?
Score: 8 Votes (Like | Disagree)

justgeig
Glad to hear other countries get to partake :-) I've enjoyed it so far
Score: 8 Votes (Like | Disagree)

sideburn
Give me iCloud for movies too and I'll start buying movies, donate my DVDs and never look back... :D
Score: 3 Votes (Like | Disagree)

Wow, I should move to Estonia, they get it in English there.

One of the benefits of using such a small and insignificant language.

Almost every feature length film is in its original language, with subtitles. The notable exception are Pixar, Dreamworks etc animations with professional local voice work, but they usually have screenings in English as well.

I cringe every time I use applications translated into Estonian. It's just painful. English is a lot less awkward for computing.
Score: 3 Votes (Like | Disagree)

alent1234
another step closer to the upcoming apple tv
Score: 3 Votes (Like | Disagree)

They are good markets for Apple to sell movie, because nobody in those countries work so have lot of time for watching movie. And rest of Europe can pay for their itunes bill. Haha. :rolleyes:


You should know that the vast majority of people work very hard...and for those that don't, is not entirely their own fault..

As for the claim that the rest of Europe pays our bills, you're probably referring to the bills that capitalism made.
Score: 2 Votes (Like | Disagree)
Read All Comments