With its WatchStand, accessory maker Griffin has come up with a unique take on an Apple Watch charging dock, incorporating a cord management feature that sets it apart from the many other stands on the market. Made of plastic instead of aluminum or wood, Griffin's stand is also one of the more affordable options available.

I've been testing the Griffin WatchStand for the past week and have been impressed with the level of functionality vs. the price, but there are a few drawbacks that might not make it the best stand choice depending on which Apple Watch you own. 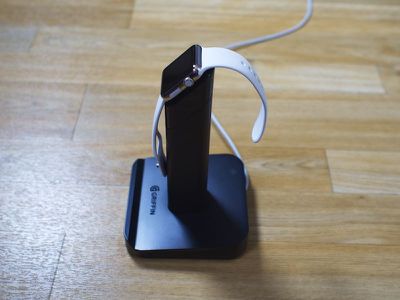 When it comes to looks, the Griffin WatchStand is not quite as attractive as some other options on the market. Its black plastic design doesn't complement the Apple Watch and other Apple devices, it feels overly tall, and it doesn't blend into a range of different decors as well as aluminum or wood.

Griffin WatchStand next to Twelve South HiRise for Apple Watch
Aesthetic preferences vary heavily by person, so the form and material of the WatchStand may not be a negative for some. Though it's made of plastic, the WatchStand doesn't really look cheap and there are no flaws in its construction -- it has a wide, heavy rubber-bottomed base for stability and the part of the stand that holds the Apple Watch charger is well-designed and at an ideal viewing angle.

Size wise, the base of the WatchStand measures in at 5.5 inches by 3.15 inches, and the stand portion is nearly eight inches tall. That height feels less ideal than a shorter stand when glancing over at the watch from bed or on a desk, but it is necessary for the cable management feature. It weighs just over a pound, which makes it feel sturdy, but with its height, I was worried I might knock it over accidentally.

There are three components to the WatchStand: a base, the main stand with grooves for the cable, and a cable cover. The Apple Watch charging cable fits into the top of the stand, which is made from a soft rubber so the metal of the watch is never in danger of being scratched.

If you have a stainless steel Apple Watch with a metal charger, you'll need to add in a small rubber insert to make it fit correctly. There's a hole below the circular cutout for the charger where the cable is fed through, and then excess cable can be wound around the base.

The cable fits into the grooves in the rubber stand and you can wind up as much or as little as you like, depending on how much cord you need to reach a wall socket. Winding the cable up can be fiddly, because it needs to be pulled tight as you wind so there's room for the cable cover.

Being able to wind up excess cord is a great feature that other watch stands don't offer. Apple shipped the Apple Watch with a two-meter cord, resulting in a lot of excess cable for users who have sockets located in close proximity to nightstands or desks. With other watch stands, I often have a lot of unsightly cable to deal with, but it's out of sight with the Griffin stand.

After the cable's been wound, a plastic cover fits over the inner rubber stand and secures it to the base. If you didn't wind the cable tightly enough, it'll be difficult to get the cover on. Once the cover is in position, the end of the cable is fed through a hole in the base and underneath the base's rubber feet.

Unlike some other stands, the Griffin WatchStand does not have a slot to accommodate closed-loop bands like the Milanese Loop. Open bands sit fine on the dock, but to charge a band in the closed position, the watch needs to be put on the dock sideways. It's not a huge deal, but sideways is not an ideal viewing position

Easy viewing at night or while charging is one of the main features that these Apple Watch stands advertise, and having to charge sideways negates that function. For that reason, I wouldn't recommend this dock to someone who plans to use it with a closed-loop band.

For other bands, the WatchStand works perfectly well. The angle makes it easy to glance at the watch at night, and if desired, you can also change the position of the post in the middle to face left or right rather than moving the whole stand. It's also worth noting that Griffin has designed the front of the WatchStand to hold an iPhone.

Griffin's WatchStand offers a lot of value for the price. Its cable management feature is excellent if you have excess cord to deal with, and the ability to hold an iPhone is also a nice add-on. For those of you with bands like the Milanese Loop, the WatchStand works, but it's not ideal.

If you're looking for an affordable stand for an Apple Watch with an open-loop band, the Griffin is a solid choice.

Griffin's WatchStand can be purchased from the company's website for $29.99.

nfl46
This is the stand I have. I love it. Thanks for the review!
Score: 1 Votes (Like | Disagree)

I imagine he's talking about the buttons on the Apple watch I think they have stickers on them.

The Digital Crown and side button on my Apple Watch are covered with WatchDots. I'm going to be sharing a review in a day or two.
Score: 1 Votes (Like | Disagree)

Why are the buttons white?????? Custom make?

It has no buttons. It's simply a stand to feed your Apple Watch charger through.

I just picked this up the other day at Best Buy. The first night i used it, i rested my watch on it and it said and made the audible 'it's charging' sound. I go to sleep and wake up to it being still at 52%. Since then, I've noticed that sometimes when setting the watch on the stand, the watch slowly droops and settles into place, losing contact and the charge. If the charger magnet were stronger, this probably wouldn't happen -- I'm going to look for an upright solution rather than an angled one.
Score: 1 Votes (Like | Disagree)
Read All Comments