Review: The Twelve South HiRise is an Ideal Stand for Apple Watch

Twelve South is an accessory company that's known for its high-quality stands for the iPhone, iPad, and Mac, so it's no surprise that it was one of the first to announce a dock for the Apple Watch.

The Twelve South HiRise for Apple Watch follows in the footsteps of the company's other HiRise docks, offering an Apple Watch storage and charging solution that's attractive, well-designed, and suitable for use in a wide range of locations, from a desk in an office to a nightstand in a bedroom.

I've been using the HiRise for Apple Watch for over a week now, as have a few of my colleagues both at MacRumors and TouchArcade, and the universal consensus is that it's a great stand, albeit with a premium price tag. 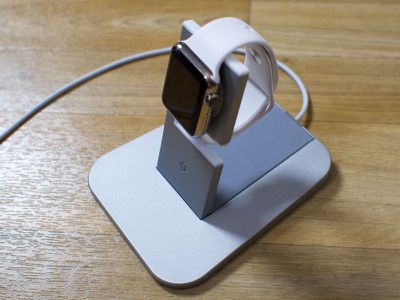 HiRise for Apple Watch is made from brushed metal and is available in black or silver to match the finishes of the Apple Watch Sport and standard Apple Watch. It also matches the company's HiRise products for other devices, if you happen to own any of those.

As I've learned first hand, the Apple Watch in stainless steel is extremely prone to scratching. When looking for a dock for the Apple Watch, it's advisable to make sure all surfaces on the dock that touch the watch are covered with something that doesn't have the potential to cause damage.

The HiRise's base measures in at 3.9 inches by 4.76 inches, giving it enough surface area to sit on a desk or table without wobbling or shifting when an Apple Watch is placed on it. The bottom of the base is also coated in rubber for additional grip.

Twelve South ships the HiRise for Apple Watch in several pieces, so some assembly is required. There's the base, the portion of the stand that holds the Apple Watch, and a cable cover, coated in leather. Twelve South calls the cable cover a "landing pad," with the leather in place to prevent the buckle of a band from being scratched should it come in contact with the base of the dock.

The stand fits into the base and is then held in place with the cable cover. Twelve South includes a screw in the package to secure the stand to the base, and while the instructions suggest this is optional, I'd recommend using it (even though installing it is a bit frustrating). Without the screw in place, the stand can be pushed backwards when a small amount of force is supplied, making the setup feel unstable. If you plan to travel with the dock, you may not want to use the screw, as it prevents it from being easily disassembled.

An Apple Watch charger fits into the circular cutout at the top of the HiRise, while the cord is routed down the back and under the cable cover, where it can then be plugged into the adapter for charging. The charger fits perfectly into the cutout and is held in place by the aforementioned silicone.

I never had an issue with the magnetic charging plate coming loose from the stand, but if it does get knocked out of place, it can be re-secured by pushing it back in. If you need to remove the Apple Watch Charging Cable from the HiRise, it takes only seconds to pop it out and release the cord.

Most of us probably don't use our Apple Watches while they're charging, but the HiRise puts the Apple Watch at a tilted angle that makes it easy to check the time during the night or snooze an alarm in the morning.

Overall, I had no complaints about the Apple Watch HiRise from Twelve South. It does everything I'd expect an Apple Watch dock to do, which consists of looking nice on my desk, holding my watch and making it easy to place the watch on the charger.

It is a superior solution to a bare charging cable that requires the watch to be placed flat on a desk, as it keeps the Apple Watch elevated and out of harms way. It's also quicker to stick the Apple Watch on the HiRise than it is to fiddle with picking up a cable and making sure it's aligned properly.

No one who purchases the HiRise for Apple Watch is going to be disappointed with how it performs, but it is worth noting that $50 is a lot to pay for an accessory that does little more than give you an attractive place to put your watch.

HiRise for Apple Watch can be purchased from the Twelve South website for $49.99.

I think I'll save myself sixty bucks and just use my charger flat on my nightstand. Works fine.

federico0212
I absolutely think Spigen's apple watch stand is the best.
It is $20 for a machined aluminum stand that looks like an iMac's, has rubber for the watch, allows it to be used with a Milanese band, it's awesome.
The only problem is that it doesn't hide the cable.
Score: 3 Votes (Like | Disagree)

genshi
I'm looking for a stand for my Apple Watch and the best one I've found so far is the Nomad Stand ('http://www.hellonomad.com/products/stand-for-apple-watch'). Yes, it's pricier than the others, but it's also much better made while being brilliantly simple yet stylish (just like Apple products.) And it hides the charging cable as well. I haven't pulled the trigger on it just yet... but I'm getting close. 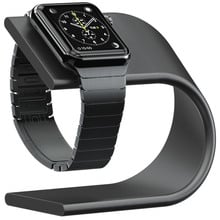 DavidTheExpert
I think I'll save myself sixty bucks and just use my charger flat on my nightstand. Works fine.
Score: 2 Votes (Like | Disagree)

I'm looking for a stand for my Apple Watch and the best one I've found so far is the Nomad Stand ('http://www.hellonomad.com/products/stand-for-apple-watch'). Yes, it's pricier than the others, but it's also much better made while being brilliantly simple yet stylish (just like Apple products.) And it hides the charging cable as well. I haven't pulled the trigger on it just yet... but I'm getting close.

That is a thing of beauty. I'm not a particularly large fan of the Apple Watch, much less the stands one might buy for it, but that definitely has appeal.
Score: 1 Votes (Like | Disagree)
Read All Comments