Alongside the start of pre-orders for the Apple Watch last month, Mophie announced the Watch Dock, a $60 aluminum stand for the Apple Watch with leather accents and hideaway cable storage. It took a bit longer than the original estimate of April 24 for the Watch Dock to launch, but it's now shipping out to the first batch of pre-order customers and Mophie has provided us with one for testing purposes. 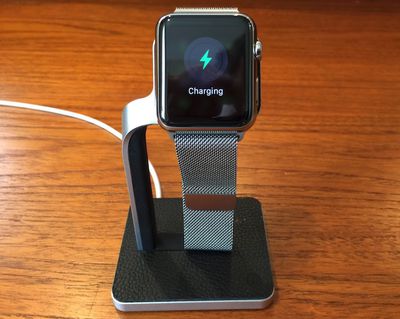 The Watch Dock is very straightforward, with the box containing only the stand and a quick start guide illustrating how to route your existing Apple Watch charging cable through the stand. A circular cutout at the top of the stand holds the inductive charger, with the cable being fed through a rubber-enclosed channel along the inside of the stand's arm, disappearing into the base and out the back.

The cable management system offers a clean look for the stand and the design makes it easy to mount an Apple Watch with either a looped or a traditional band for charging. The angled design of the stand makes it ideal for placement on a nightstand or desk where an occasional glance might be necessary.

Leather accent pads around the charger and at the base of the stand offer a unique look, with the upper one around the charger helping keep the watch from scratching against the aluminum of the stand. The leather pad on the base is interrupted by a rubber plug that allows the USB portion of the cable to be fed through the base. The plug detracts a bit from the overall look, but not terribly so, as it is close to the stand arm.

At under four ounces, Mophie's Watch Dock is by no means heavy. The relatively broad stand base and the fairly light weight of the Apple Watch means it's not prone to tipping, but the weight of a long charging cable can tend to pull on the stand a bit depending on how the cable is draped. The bottom of the Watch Stand is covered with smooth rubber to protect against scratches, but it won't do much to hold the stand in place.

The Watch Dock measures just over 4.5 inches tall on its own, which matches the announced dimensions but looks shorter in reality than it did in marketing images. Some users had complained that the stand looked too tall based on the promotional images, but the stand actually seems just about right, with a loosened Milanese Loop band hanging down and resting only slightly on the base of the stand. Firmer bands such as the Sport Band will obviously be held higher on the stand.

At $60, the Mophie Watch Dock isn't cheap, with other options such as Griffin's WatchStand and ElevationLab's NightStand coming in at around half the price. But the aluminum design and leather accents of the Watch Dock make for a nice combination that will appeal to some users. And it's by no means the most expensive option on the market, with several notable wood stands coming in at up to $100 or even more.

Dennison
That looks like faux leather. The overall look is just fake and kind of gross. I'll pass.

I guess I'm spoiled by Apple's all-aluminum designs at this point.
Score: 6 Votes (Like | Disagree)

That looks like faux leather. The overall look is just fake and kind of gross. I'll pass.

I guess I'm spoiled by Apple's all-aluminum designs at this point.


Having a soft surface may not be bad at all for a watch to prevent accidental scratching since it will be docked 365 times per year :)

I actually like the clean and practical design plus the reasonable price.


:D:D
Here's a few pics of my stand, including one to show you how flush the charger magnet is with the rubbery black surface around it. I'm really beyond impressed with this thing. It far superior to the one shown in the OP in my opinion.
Score: 2 Votes (Like | Disagree)

I agree that they really nailed the apple look. Only difference is if Apple made it they would charge $79 for it.


I didn't notice someone had already mentioned the Spigen. How do you like it?


I love it. It looks great, reminds me of the iMac base. But it doesn't just look great, it works great too. The charger fits snuggly like a glove into the hole, and it goes in from below so the magnet sits completely flush with the top of the stand. It's flawless, and a steal for $20. Good job spigen!!
Score: 2 Votes (Like | Disagree)
Read All Comments

7 hours ago by Juli Clover

iPhone Launched in 2007 Without These 8 Basic Features