Apple's vice president of product marketing Greg Joswiak recently spoke with the UK's Daily Express about the future of its biometric authentication systems, noting that while Face ID will be expanded to more devices over time, Touch ID will "continue to have a role" for the foreseeable future. 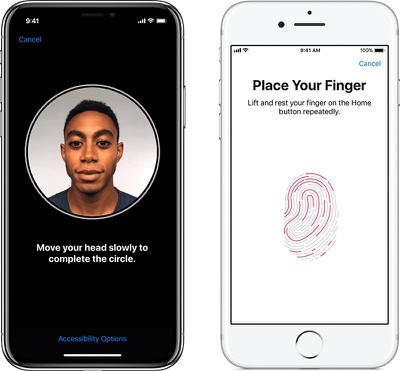 "Certainly, we'll continue to put it on more devices but also ‌Touch ID‌ will continue to have a role - it's a great technology on our iPad lineup and we don't see it going away anytime soon," said Joswiak.

While the latest iPad Pro models are equipped with the more-expensive Face ID system, lower-end ‌iPad‌, ‌iPad‌ Air, and ‌iPad‌ mini models still have ‌Touch ID‌ home buttons to keep costs down, and that will likely remain the case for years. ‌Touch ID‌ is also built into recent MacBook Pro and MacBook Air models.

As for the iPhone, Apple continues to sell older ‌iPhone‌ 7 and ‌iPhone‌ 8 models with ‌Touch ID‌, but it has not introduced a new ‌iPhone‌ with fingerprint authentication since 2017. The upcoming iPhone 11 models are expected to stick with Face ID, which Apple says has been made 30 percent faster in iOS 13.

Looking ahead, multiple reports have claimed that Apple plans to release an iPhone with both Face ID and an under-display fingerprint scanner in 2020 or 2021. The under-display option could certainly be given a new name, however, to distinguish it from traditional ‌Touch ID‌ with a home button.

Freida
Totally cannot wait. FaceID is much worse in almost every way than TouchID. TouchID is superior.
The only reason why FaceID exists is because they wanted bigger screen and no bezels but couldn't get the TouchID under the display to work in time.
Score: 22 Votes (Like | Disagree)

Moonjumper
Great. I much prefer being able to interact with the security when I want instead of having a camera stare at me the whole time.
Score: 17 Votes (Like | Disagree)

Totally cannot wait. FaceID is much worse in almost every way than TouchID. TouchID is superior.
The only reason why FaceID exists is because they wanted bigger screen and no bezels but couldn't get the TouchID under the display to work in time.

Funny Touch ID failed me way more then Face ID ever does. Wet fingers, dirt on fingers, gloves etc touch id has major flaws and has a long way to go. If both are on a future iPhone then everyone will be happy
Score: 16 Votes (Like | Disagree)

Totally cannot wait. FaceID is much worse in almost every way than TouchID.

In what parallel universe are you living, sir? In mine it is exactly the opposite.
Score: 14 Votes (Like | Disagree)

FaustsHausUK
TouchID is superior in basically every use case except when your hands are wet. My iPhone has touch, my iPad has face, and the latter is finicky as heck.
Score: 14 Votes (Like | Disagree)
Read All Comments

Saturday May 30, 2020 4:00 pm PDT by Eric Slivka
Apple today doubled the price for upgrading the RAM on the entry-level 13-inch MacBook Pro, with customers in the United States now being charged $200 to move from 8GB to 16GB compared to the previous $100 upgrade price. Similar increases are seen in other countries, such as moving from €125 to €250 in Germany and from £100 to £200 in the United Kingdom. Current pricing on RAM upgrade for ...
Read Full Article • 295 comments

Monday June 1, 2020 7:50 am PDT by Joe Rossignol
If you are still hanging on to a Mid 2012 model of the 15-inch MacBook Pro with a Retina display, and require a new battery or other repairs, be sure to book an appointment with a service provider as soon as possible. In an internal memo today, obtained by MacRumors, Apple has indicated that this particular MacBook Pro model will be marked as "obsolete" worldwide on June 30, 2020, just over...
Read Full Article • 151 comments

Sunday May 31, 2020 7:26 pm PDT by Frank McShan
Apple is introducing a new internal USB-C Diagnostic Tool as a successor to its existing Serial Number Reader, which can be used to both collect a device's serial number directly from its logic board and test power on a device itself. Image via Giulio Zompetti With only a Lightning version previously available, images have surfaced of a new USB-C Diagnostic Tool (UDT) that appears to be known ...
Read Full Article • 11 comments