Timed with midsummer, the 30-second spot depicts a man napping on a reclining lounger in a backyard. After receiving a trio of iMessage notifications on his iPhone XR, he slowly raises the lounger to line up his face with the iPhone and unlocks the device with Face ID, all while continuing to lay down.


The messages come from a friend named Craig, who asks the man if he still plans to come around, suggesting that the two had made plans together. Instead, the man promptly returns to his nap alongside his dog. The ad is aptly titled "Nap" and features the song "Nice" by Grammy Award-winning DJ Latroit. 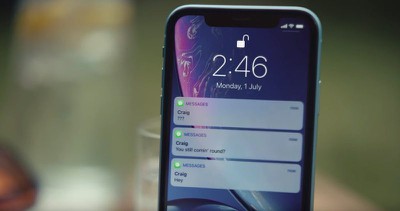 Face ID debuted on the ‌iPhone‌ X in 2017. At the time, Apple said the probability that a random person could unlock someone else's ‌iPhone‌ X was approximately one in 1,000,000, versus one in 50,000 for ‌Touch ID‌.

The ad is part of Apple's ongoing "That's iPhone" marketing campaign promoting both hardware and software features of the device, such as iMessage encryption, App Store privacy, ‌iPhone‌ material recycling, and water resistance. "Face ID is even easier and more secure than ‌Touch ID‌. That's ‌iPhone‌."

Pelea
Touch ID is far easier and More convenient to use. I won’t be purchasing any iPhone until touchid is back
Score: 29 Votes (Like | Disagree)

Touch ID is far easier and More convenient to use. I won’t be purchasing any iPhone until touchid is back

I have an iPad mini that uses Touch ID and an iPhone Xs Max with Face ID. Face ID is faster and more convenient, in my opinion.
Score: 26 Votes (Like | Disagree)

Rogifan
Do people still think Touch ID is coming back to phones?
Score: 21 Votes (Like | Disagree)

hortod1
My faceID never works at the distance depicted in the ad, nor would it work at the angle depicted.

Also doesn’t work in bright sunlight, or holding the phone in landscape mode, or in bed with the side your face smooshed in a pillow - never had any of these issues with touchID.
Score: 17 Votes (Like | Disagree)

kemal
There is nothing funny about that notch.
Score: 16 Votes (Like | Disagree)

hlfway2anywhere
This is why I think people are delusional for thinking Touch ID is coming back
Score: 16 Votes (Like | Disagree)
Read All Comments