If you've been waiting since last month for a chance to try out iOS 16 and all of Apple's other upcoming operating system updates without needing a developer account, now's your chance, as Apple has launched public betas for all of the updates. 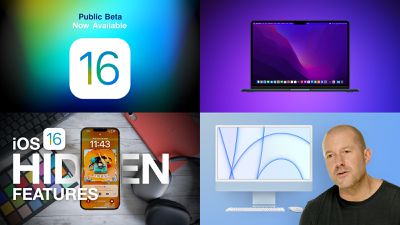 This week also saw the launch of the redesigned M2 MacBook Air, the official end to the working relationship between Apple and Jony Ive, and a couple of special guests on our podcast, so read on for details on all of these topics!

Apple has released the first public beta of iOS 16, allowing anyone with an iPhone 8 or newer to test out the software update for free. iOS 16 includes plenty of new features, ranging from a customizable Lock Screen to the ability to edit or unsend iMessages and more.

We put together a guide explaining how to install the iOS 16 public beta for those interested in testing the update. For those opting to wait, iOS 16 should be released to all users in September.

With the iOS 16 public beta now available, we have put together a list of seven new features that are worth checking out on your iPhone.

The headline new feature of iOS 16 is the ability to customize the Lock screen with multilayered wallpapers, custom fonts for the date and time, and widgets, but our list includes six other useful new features that improve the overall experience of using an iPhone.

The new MacBook Air with the M2 chip has finally launched. Ahead of time, the first reviews of the new MacBook Air were shared by some media outlets and YouTube channels, providing a closer look at the redesigned notebook in action.

One of the reviews described the new MacBook Air as "Apple's near-perfect Mac," but be aware that the base model with 256GB of storage has slower SSD speeds in benchmarks compared to the equivalent previous-generation model.

One of the latest episodes of The MacRumors Show podcast features special guest Ross Young, CEO of Display Supply Chain Consultants and a well-known source of info for future Apple products.

Young discussed some of his biggest leaks about Apple's plans for the next year and beyond, including a mini-LED version of the Studio Display with ProMotion support and a larger 14-inch iPad model in 2023.

Later in the week, we talked with Justine Ezarik ("iJustine") about her earlier impressions of the M1 MacBook Air given that she's had around a week to spend with it already. She shared her impressions of the design and specs, as well as how well it's holding up for everyday use.

In a recent video on our YouTube channel, we highlighted some hidden or less prominent iOS 16 features that you might not know about yet.

If you have installed the iOS 16 beta on your iPhone, or you are simply curious about what is new, be sure to watch the video for a closer look at 10 useful features and improvements in the update.

The New York Times this week reported that Apple and its former design chief Jony Ive have mutually agreed not to renew their contract to work together, marking the end of a 30-year partnership.

Ive played a key role in designing some of Apple's most iconic products, including the iPhone, iPod, iPad, and Apple Watch. Ive had served as a consultant to Apple through his design firm LoveFrom since 2019.

adamw
Thanks for the warning about slower SSD speeds in the base model of the new M2 MacBook Air and the 13" M2 MacBook Pro. Every serious power user should get at least a 512GB SSD and 16GB or more RAM in my opinion, to help "future proof" their Mac. Every day casual users should be fine with 8GB RAM and 256GB SSD with the slower speeds. In actuality, serious power users should likely skip both the M2 MacBook Air and 13" M2 MacBook Pro, and go with a 24 core GPU or higher 14" or 16" M1 MacBook Pro (with M1 Pro or Max chips), or if they need a desktop, get a Mac Studio with an M1 Max or M1 Ultra chip inside.
Score: 3 Votes (Like | Disagree)

I just saw that video. No matter how you slice it the M2 chip runs at higher wattage and clock speed than the M1 and needs active cooling like the M2 pro or you will be sacrificing performance to a greater degree.
Score: 3 Votes (Like | Disagree)

kwikdeth
Bye Jony. It's not you. It's not us. We've all just different people now.
Score: 2 Votes (Like | Disagree)

chrono1081
I'm loving the hell out of this MacBook Air. It's been putting my $4500 i9 64 gigs ram 16' MacBook Pro from 2019 to shame in everything except rendering (which is to be expected, and it's not far behind on rendering!)
Score: 2 Votes (Like | Disagree)
Read All Comments