Apple is believed to have struck a deal with a new supplier of telephoto lens components for a periscope camera system in future iPhones, reports The Elec. 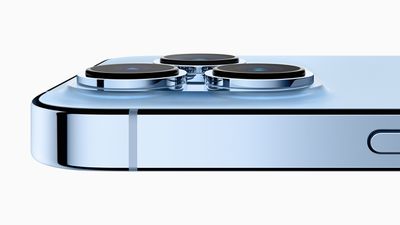 According to an earlier report by The Elec, Apple visited Jahwa Electronics' new facilities during the first half of 2021, and it is "likely" that the investment is being made so that Jahwa can begin supplying Apple with OIS actuators from next year.

Apple usually asks suppliers to build production lines exclusively for its own parts and components, but the new facilities set to be built in Gumi would require Apple's approval once they're finished, and the whole process would take a year from now to conclude.

The OIS actuators, which combine OIS and autofocus functions in one, are likely to be for telephoto cameras in 2023 iPhones. The Elec previously linked the components to a periscope camera system, allowing for increased optical zoom.

Rumors about the iPhone getting a periscope lens have been circulating since early 2020, with reputable analyst Ming-Chi Kuo the first to mention the possibility. Kuo initially said that a periscope lens would be an iPhone 14 Pro feature, but now says he expects the lens type to arrive with the iPhone 15 Pro, a prediction that analyst Jeff Pu has also made.

In a periscope system, light entering the telephoto lens is reflected by an angled mirror towards the camera's image sensor. The change in direction in which the light travels allows for a longer "folded" telephoto setup inside phones, enabling users to zoom in further without any blurriness.

If it was me camera bumps would never been a thing in the 1st place.

Does a bump off-put buyers or something?

I mean, like 99% of consumers are using cases, so the bump is negated and it’s a non-issue.
Score: 7 Votes (Like | Disagree)

They should find a different use for that lens apart from 100x zoom. The minuscule number of times anyone needed that kinda zoom does not justify the investment.

TheYayAreaLiving ?
Sweet! It looks like it’s all coming together for the future iPhones.
Score: 5 Votes (Like | Disagree)

To me, I’ll probably skip the ‘14’, (As it’s likely an ‘S’ year) and hold out for this feature, as the Periscope lens alone is worth the upgrade to have this advantage. Everything is lining up for this to be the big debut in 2023.

subjonas
I want a periscope camera in my SE 2016 please. ?
Score: 4 Votes (Like | Disagree)
Read All Comments

Thursday July 14, 2022 2:27 am PDT by Tim Hardwick
The iPhone 15 Pro Max will be the sole Apple smartphone of 2023 to get a periscope camera lens and benefit from greatly enhanced optical zoom, according to analyst Ming-Chi Kuo. Rumors about the iPhone getting a periscope lens have been circulating since early 2020, when Kuo first mentioned the possibility. The analyst initially said that a periscope lens would be an iPhone 14 Pro feature,...
Read Full Article • 105 comments

Monday January 3, 2022 7:51 am PST by Joe Rossignol
At least one iPhone 15 model launched in 2023 will feature a periscope camera system, allowing for increased optical zoom, according to analyst Jeff Pu. With a periscope system, light entering the telephoto lens on the back of the iPhone would be reflected by an angled mirror towards the camera's image sensor. The change in direction in which the light travels would allow for Apple to fit a...
Read Full Article • 104 comments

Monday November 7, 2022 12:55 pm PST by Juli Clover
There's almost a year to go until we get new iPhone 15 models in September 2023, but we've been hearing rumors for months now. It's looking like the iPhone 15 models could get more notable updates than we saw for the iPhone 14, including features many iPhone users have wanted for years. We've rounded up some of the best features coming to the iPhone 15 that we've heard so far so MacRumors...
Read Full Article • 251 comments

Friday September 9, 2022 1:37 pm PDT by Hartley Charlton
With pre-orders for the iPhone 14 lineup now open, many iPhone customers will be weighing up whether or not now is the time to upgrade their device. The iPhone 14 models offer some substantial upgrades with Emergency SOS via satellite, Crash Detection, camera improvements, and more, but some customers will now be casting their mind forward to next year, when it may be a more appropriate time ...
Read Full Article • 304 comments

Tuesday August 30, 2022 2:40 am PDT by Tim Hardwick
The Pro models in Apple's soon-to-be-announced iPhone 14 series will feature a new Ultra Wide camera with a larger sensor for better low light sensitivity, but the technology will come at a significant cost increase, predicts respected analyst Ming-Chi Kuo. In his latest tweet, Kuo says that the two iPhone 14 Pro models will have an Ultra Wide sensor with larger 1.4µm pixels compared to the ...
Read Full Article • 129 comments

Sunday September 18, 2022 7:53 pm PDT by Joe Rossignol
Following the launch of the iPhone 14 Pro and iPhone 14 Pro Max, some early adopters of the devices have noticed that the rear camera's main lens vibrates uncontrollably when the camera is opened in apps such as Snapchat, TikTok, and Instagram, resulting in shaky video. The issue does not appear to affect the built-in Camera app. The issue has been reported by users across Twitter, Reddit, Ti...
Read Full Article • 464 comments