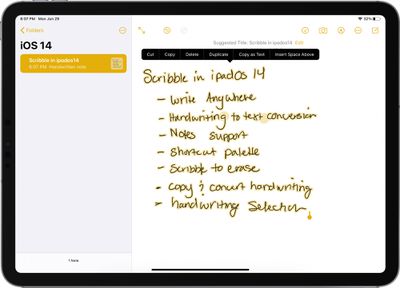 According to Apple's iOS and iPadOS Feature Availability page, these languages can now be used when copying handwriting as text and there's also data detector support.

That means if you write something in French, German, Italian, Portuguese, and Spanish, you can now copy the handwritten text and paste it as standard typed text, and addresses and other content written in these languages will also show up as interactive and clickable.

ghanwani
I miss the days of old technology (like plain old pen and paper) where the feature was released for all languages at the same time.
Score: 14 Votes (Like | Disagree)

PinkyMacGodess
I just wish there was a way to 'Find My'...

V86
Please have the Nordic Languages be next. (Norwegian, Danish, Islantic, Finnish, Sami and Swedish)

C’mon we gave you Thor and all the other awsome Gods. Even Loki has become a much loved God.

If not we will have to unleash Ragnarök!
[HEADING=2][/HEADING]
Score: 3 Votes (Like | Disagree)

It's like the differences between American, Canadian, British, Australian, New Zealand English, but standardizing on British English if you need to be understood universally.

In Latin America, conversationally everyone speaks in "slang", or rather, the local dialect. But TV shows that are international would use "Latin American" phrasing so that everyone can understand, or the predominant dialect (usually Mexican).

Although you are completely right, the differences are in the pronunciation and some vocabulary. But the syntax and the grammar is exactly the same for all Spanish-speaking countries. In that case, I don't understand why is it needed to differentiate the different regions when we are talking mainly about recognition of written text.
Score: 3 Votes (Like | Disagree)

Will it be able to automatically detect when I switch languages? Now that would be cool!

If not all languages then hopefully at least dual, the world is getting smaller and I guess a good chunk of people are using 2 languages regularly, I’d like the across the board, so predictive text can apply the correct language to each word.
Score: 3 Votes (Like | Disagree)

InsideApple
Wow…I finally feel special for once, as a Swiss German speaking person, this is great.
Score: 3 Votes (Like | Disagree)
Read All Comments