After an abundance of rumors claiming that Apple's upcoming iPhone 13 will feature a smaller notch, alleged images of the iPhone 13's front glass have now emerged, providing a first look at the new front-facing design of Apple's next-generation of smartphones. 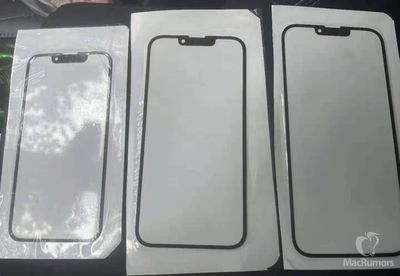 Greek repair company iRepair has provided MacRumors with a photo purporting to be of the front glass panels for ‌iPhone 13‌ models, with the same three 5.4-inch, 6.1-inch, and 6.7-inch display sizes as the iPhone 12 lineup.

The notch on each iPhone is visibly smaller as a result of the earpiece speaker being moved up into the top bezel, a design choice that was initally rumored for the iPhone 12 last year but ultimately failed to materialize.

A number of sources have previously claimed that the Face ID components will be made more compact on the ‌iPhone 13‌, resulting in a smaller notch. According to a report from Japanese site Mac Otakara, citing sources within the Chinese supply chain, the ‌iPhone 13‌'s TrueDepth camera array "is getting narrower" because the receiver at the top of the display will move to the edge of the case, suggesting that the notch will be slimmer. DigiTimes similarly claimed last month that the ‌iPhone 13‌ will feature a redesigned ‌Face ID‌ system that will allow for a smaller notch at the top of the screen.

The original notch on the ‌iPhone‌ X in 2017
The design of the notch has gone unchanged since its debut on the ‌iPhone‌ X in 2017. After shrinking the notch this year, analyst Ming-Chi Kuo said that Apple plans to switch to a hole-punch display design for at least some 2022 ‌iPhone‌ models, similar to the Samsung Galaxy S21 and other recent Android smartphones, followed by an ‌iPhone‌ with a true all-screen design without any notch or hole-punch as soon as 2023.

Apple is predicted to be returning to its usual September smartphone unveiling for the ‌iPhone 13‌ lineup, with new models expected to feature a faster A-series processor, a 120Hz ProMotion display, an improved 5G modem from Qualcomm, camera improvements, and more.