iOS and iPadOS 14.5 beta 3 includes a new "Item Safety Feature" that helps prevent someone from stalking or tracking you with item trackers such as AirTags. 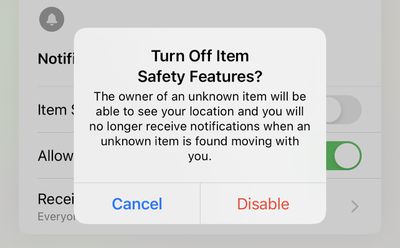 The new toggle was higlighted by 9to5Mac contributor and developer Benjamin Mayo, who explains that with the feature toggled on, your iPhone will notice that someone has placed an AirTag or other Find My-compatible item tracker in your possession and prevent your location from being shared. If you attempt to turn the toggle off, the Find My app warns you that by doing so, "the owner of an unknown item will be able to see your location."

The prompt states that with the toggle off, your ‌iPhone‌ will no longer send you notifications if an unknown item is found moving with you. iOS 14.5 beta 3, released this week, includes a new Items tab within the ‌Find My‌ app, which is primarily expected to be the home of Apple's upcoming ‌AirTags‌ item tracker.

MacRumors contributor Steve Moser last year discovered code within iOS 14.3 beta 1 that states, "If you feel your safety is at risk due to this item, contact your local law enforcement. You may need the serial number of this item." Additionally, iOS code says that users should learn how to disable an item, which in ‌AirTags‌' case may involve removing the battery, in order to stop it from transmitting your location.

‌AirTags‌ have been rumored to be launching for months now, and the most recent hope is that a launch will take place during a virtual event this month. Initial speculation pointed to an event taking place on March 16, but Bloomberg's Mark Gurman says that an event on March 16 won't happen.

A date for the potential event is unknown, but March 23 and March 30 appear to be reasonable guesses based on Apple's preference for Tuesday events and Apple's comments that its App Tracking Transparency requirement that's being finalized in iOS 14.5 will launch in "early spring."

ececlv
thats real cool. Unfortunately that means if you put a tracker on your own backpack/car etc when someone steals it, it will warn them that they are being tracked.
Score: 20 Votes (Like | Disagree)

thats real cool. Unfortunately that means if you put a tracker on your own backpack/car etc when someone steals it, it will warn them that they are being tracked.

Damn that would be bad. Hope they have a solution for this. A kidnapper or car thief with an iPhone can disable it if I’m reading correctly.

then I thought, well if it’s my own that I’m using to track my car maybe it won’t, but then realized that stalkers would have their own tag to stalk someone so they would have the same disable or continue option. Super curious how they solve this.
Score: 8 Votes (Like | Disagree)

thats real cool. Unfortunately that means if you put a tracker on your own backpack/car etc when someone steals it, it will warn them that they are being tracked.

Presumably it’s going to have some kind of time delay before it activates? It’s not going to disable every time you sit next to someone on the bus?
Score: 8 Votes (Like | Disagree)

LeadingHeat
This is exactly what I suggested the code should look like! If your phone detects that a tracking item is near you but not owned by you, then it will alert you. Obviously I know that the engineers at Apple are smart and probably already thought of this but I’d like to think it was me, a small and insignificant macrumors forums postee ?
Score: 7 Votes (Like | Disagree)

JM
This seems like Apple thought of a way to prevent someone slipping a tracker into your backpack or pocket to see where you go so they can follow you and do crimes later.

Mark my words. This will be released same day air tags come out. End of March.

Sure, Sherlock?
Score: 3 Votes (Like | Disagree)
Read All Comments

Monday June 7, 2021 3:51 pm PDT by Juli Clover
Apple in iOS 15 is adding new Separation Alerts to the Find My app, which will let you know if you leave an Apple device, a device attached to an AirTag, or a Find My-enabled third-party device behind. Enable separation alerts, and if you leave a device, AirTag, or compatible third-party item behind, your iPhone will alert you with notifications and Find My will give you directions to your...
Read Full Article • 50 comments