MacRumors has learned that "AirTag" is likely the marketing name of Apple's rumored Tile-like item tracking tags, which will help users keep track of their personal belongings, such as their keys, wallets, and backpacks. This name was initially uncovered in iOS 13.2 code, but it was unclear if it was a placeholder until now.

We've also learned that the tags will likely feature a removable CR2032 coin cell battery like the Tile Pro. Based on a prototype of the tag, removing and replacing the battery will require unscrewing the back cover and performing a counter-clockwise twisting motion. The new battery must be inserted with the plus sign facing up. 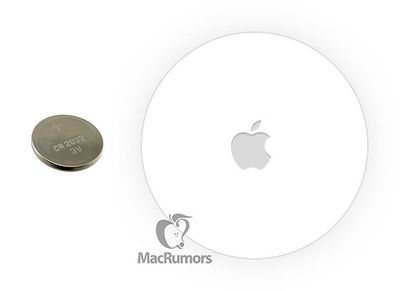 CR2032 batteries are not intended to be recharged and need to be replaced over time — for example, the Tile Pro's battery lasts around one year. Users will be required to pull a tab on the AirTag to activate the battery, and then bring the tag near a device like an iPhone or iPad to initiate the pairing process.

The above information is based on a prototype of the AirTag, so the final plans could vary. Last month, for example, it was rumored that the tags will feature magnetic charging similar to the Apple Watch, but that would require a rechargeable battery.

MacRumors uncovered evidence of AirTags within iOS 13 code last year. The tags will be closely integrated with the new Find My app, which will be getting an "Items" tab. Users will receive a notification when they are separated from a tagged item, and if necessary, they can set an AirTag to start making sounds to help locate the lost item.

A few months ago, analyst Ming-Chi Kuo said Apple plans to launch the tags within the first half of 2020, although it is unclear if the COVID-19 coronavirus outbreak will change that timeframe. Kuo expects the tags to support Ultra Wideband like iPhone 11 models, likely allowing users to find tagged items with greater accuracy than Bluetooth LE or Wi-Fi.

Wasn’t there a rumor on here a month or two ago that they would wireless charge?

Yes but when it may have a CR2032 battery and it may wirelessly charge, you're covering all bases like a pro analyst.
Score: 9 Votes (Like | Disagree)

will be interesting to see if all a thief has to do to make the AirTag un-trackable is to remove the battery, but, at the same time apple has also made it locked to an iCloud account so that when/if a battery is re-inserted it can't be simply used by a different iCloud account until its wiped by the original iCloud account owner.

Um. If the criminal wants to make it untrackable, why remove the battery instead of, I dunno, flushing the tracker down a toilet?
Score: 4 Votes (Like | Disagree)

calzon65
I have so many items I need to charge, a traditional battery is welcome to me.
Score: 3 Votes (Like | Disagree)

SnarkyBear
it will have a proprietary battery size, and will require a special screwdriver to access the battery slot.
Score: 3 Votes (Like | Disagree)

humor, especially sarcasm, does not travel very well.
s/he was making a comment about apple.
Score: 3 Votes (Like | Disagree)

I don’t see why not.

Because he doesn’t have a cat!
Score: 2 Votes (Like | Disagree)
Read All Comments