WhatsApp has revealed how it will handle users who do not accept the platform's widely discussed privacy policy changes, which include increased data sharing with parent company Facebook, due to come into effect next month. 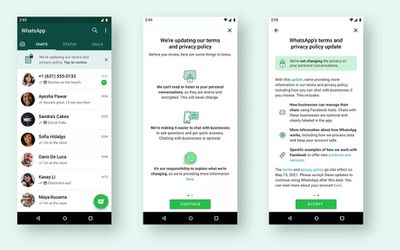 In the weeks leading up to May, WhatsApp will begin to roll out a small, in-app banner to users who have rejected its updated privacy policy. Tapping the banner will display a more detailed summary of the changes, including specifics about how WhatsApp works with Facebook.

According to an email seen by TechCrunch to one of its merchant partners, WhatsApp said it will "slowly ask" users who have not yet accepted its policy changes to comply with the new terms, "in order to have full functionality of WhatsApp," starting May 15.

If they still don't accept the terms, "for a short time, these users will be able to receive calls and notifications, but will not be able to read or send messages from the app," the company added in the note.

WhatsApp has since confirmed that the email accurately represents its plan and the specified "short time" will span a few weeks. Users who choose to not accept the new policy will see the features available to their account significantly limited. WhatsApp's policy for inactive users also states that accounts are "generally deleted after 120 days of inactivity."

WhatsApp first announced its new usage terms in January, and the changes at the time were interpreted by some users to mean that the platform would share their personal messages with Facebook.

In fact, private messages between individuals will remain encrypted end-to-end, so that they can only be accessed by those in the conversation. Messages sent to businesses, on the other hand, will be liable to be used for commercial purposes such as ad targeting on Facebook.

The perception of WhatsApp's changes caused a backlash among users of the Facebook-owned platform, causing an exodus to rival messaging apps like Telegram and Signal, which were quick to exploit the situation by tempting users with new features and the ability to import chats from WhatsApp.

Thursday March 18, 2021 2:55 am PDT by Sami Fathi
As indicated in a newly published support document, WhatsApp has ended support for iOS 9 and earlier versions of Apple's mobile operating system, requiring all users to be running at least iOS 10, released in 2016. Up until now, iOS 9 users – who will have been mainly iPhone 4s owners – were able to use the encrypted chat service. Going forward, however, iOS 10 is required, meaning users ...
Read Full Article • 50 comments

Monday March 8, 2021 3:27 am PST by Tim Hardwick
WhatsApp is working on a way to secure users' chat backups in iCloud using password-protected encryption, according to a new report from forthcoming-feature specialist WABetaInfo. The Facebook-owned chat platform began early work on the security feature back in March 2020. Currently, WhatsApp on iPhone lets users back up their chat history to iCloud, but messages and media that users back up ...
Read Full Article • 43 comments

Thursday March 4, 2021 1:05 am PST by Tim Hardwick
WhatsApp is today updating its desktop app for Mac and PC with voice and video calling support, the company announced. Like WhatsApp's mobile app, voice and video calls on the desktop equivalent are end-to-end encrypted, ensuring only the people conversing have access to the contents of a call. WhatsApp has been in the process of testing the new desktop call functions over the last few...
Read Full Article • 42 comments

Thursday November 5, 2020 5:31 am PST by Hartley Charlton
Facebook is now rolling out a new disappearing messages feature to all WhatsApp users on iOS and Android, allowing messages, photos, and videos to be marked to disappear after seven days (via TechCrunch). Users can use the feature for direct messages, and it can be enabled in groups by members with administrator privileges. The seven-day limit exists regardless of whether the recipient...
Read Full Article • 25 comments

Thursday January 28, 2021 1:56 am PST by Tim Hardwick
WhatsApp will soon require biometric authentication to link a WhatsApp account to a computer web browser or desktop app, reports The Verge. The mobile app uses a QR code to link a user account to a web browser or desktop app, but the company wants to make the process more secure so that it can't be done by anyone who happens to gain access to your iPhone. The new system will be enabled by ...
Read Full Article • 33 comments

Wednesday December 9, 2020 4:55 am PST by Hartley Charlton
WhatsApp is protesting Apple's requirement that developers submit information about what user data they collect to create new privacy labels on the App Store (via Axios). WhatsApp, which is owned by Facebook, has accused Apple of anti-competitive behavior because iMessage is preinstalled on iPhones and does not need to be downloaded from the App Store, where the new privacy labels will be...
Read Full Article • 124 comments

Friday January 8, 2021 3:27 am PST by Tim Hardwick
Encrypted messaging app Signal faced big delays in verifying the phone numbers of new accounts on Thursday because of a sudden surge in people trying to join the platform. In messages posted from its official Twitter account, the non-profit Signal Foundation said verification codes were delayed across several cellular networks, and that it was working through the backlog as quickly as it...
Read Full Article • 84 comments