Encrypted messaging app Signal faced big delays in verifying the phone numbers of new accounts on Thursday because of a sudden surge in people trying to join the platform. 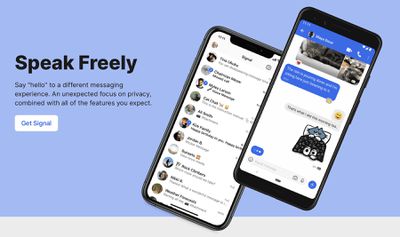 In messages posted from its official Twitter account, the non-profit Signal Foundation said verification codes were delayed across several cellular networks, and that it was working through the backlog as quickly as it could.

Verification codes are currently delayed across several providers because so many new people are trying to join Signal right now (we can barely register our excitement). We are working with carriers to resolve this as quickly as possible. Hang in there. — Signal (@signalapp) January 7, 2021

While the issue is now said to have been resolved, the surge in Signal signups followed recent privacy policy changes highlighted by rival messaging platform WhatsApp.

On Wednesday, WhatsApp began rolling out its latest terms and privacy policy, which allows the popular messaging app to share a significant amount of user data with Facebook. The changes, which are set to take effect on February 8, 2021, are mandatory and users will not be able to continue using WhatsApp unless they accept the terms.

Users who agree to the terms can expect their WhatsApp account registration and phone number, transaction data, service-related information, interaction information, mobile device information, IP address, and other data to be shared with Facebook.

Facebook told The Verge the updated terms related to messaging with businesses, and that nothing is changing for regular users, however the lack of an opt-out option and the amount of data sharing highlighted by the updated policy has raised privacy concerns.

Last month, WhatsApp publicly protested Apple's requirement that developers submit information about what user data they collect for privacy labels on the App Store, saying that it could give its messaging app a competitive disadvantage.

Late last year, Apple enforced App Store 'privacy labels'. For the first time, it's easy to compare how much data an app links to your account Looking at messaging apps, the contrast is quite stark pic.twitter.com/Ntw8sELMHX — Morgan (@morqon) January 5, 2021

Signal's uptick in users was also linked to tweets posted by Tesla CEO Elon Musk, who recently became the world's richest person. As noted by The Verge, Musk continued a trend of criticizing Facebook with a Twitter post on Wednesday evening, following the attack on the U.S. Capitol building.

Musk shared a meme suggesting the founding of Facebook had ultimately led to the day's events, and followed it up with a tweet suggesting his 41.5 million followers "use Signal," presumably instead of a Facebook-owned product like WhatsApp. Musk's suggestion was later retweeted by Edward Snowden, another prominent Signal fan.

Notably, the Signal Foundation was co-founded and funded by Brian Acton, the former WhatsApp co-founder who left the company after it was bought by Facebook in 2014. Acton later urged his Twitter followers to delete Facebook.

How do they make money if it’s free? I just looked it up. Sounds too good to be true. Thanks for referring that up app :)

"Signal is free of advertisements and free for you to use! As an Open Source project supported by grants and donations, Signal can put users first."

One of the original co owners of WhatsApp that sold you out to FB is also co owner of signal.

He left WhatsApp because early on, he didn’t like the direction and hypocrisy. Don’t try and paint him as a sell out. He isn’t.
Score: 18 Votes (Like | Disagree)

JosephAW
Just deleted the WhatsApp app the other day.
Remember all those promises by the original developers how they were going to protect our data. LOL they sold us out for money. o_O
Score: 18 Votes (Like | Disagree)
Read All Comments