Encrypted messaging app Signal has been updated with several new features that reflect its increase in popularity, including chat wallpapers, an "About" section in user profiles, and more. 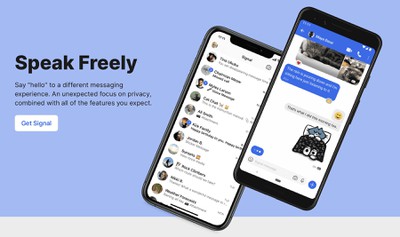 In a change that should appeal to former WhatsApp and Facebook Messenger users, Signal now lets you set chat wallpapers for individual chats, or set a single default background for all chat threads.

Elsewhere, expanded chat list previews display the sender's name in group chats, so it's easier to decide which threads to look at first.

In addition, the update includes a new setting to lower data usage for calls, and users can automatically pause attachment downloads while a call is in progress. The developers have also improved image compression and quality.

The update comes at just the right time for Signal. The privacy-focused chat app recently enjoyed a surge in account sign-ups after a bungled privacy policy update by rival service WhatsApp caused a user exodus from the Facebook-owned platform.

The app also got the thumbs up from prominent Signal users like Tesla CEO Elon Musk and Edward Snowden, which only added to mainstream interest in the app.

The last major update came in December, when the app rolled out support for encrypted group video calls. Signal Private Messenger is a free download [Direct Link] for iPhone and iPad available on the App Store.

Apple_Robert
I am probably one of the exceptions. I don’t need the fancy wallpaper and animated stickers, in order to message with someone. However, if adding these features helps get customers off WhatsApp and Messenger, that is a great thing.
Score: 32 Votes (Like | Disagree)

Pretty sure it already had it. You press the + button at the bottom left, then choose GIF. Seems to only support Giphy but it works well enough for me. Did you want something different?

I've criticised Facebook and Google for years for their dodgy privacy policies and other misdemeanours. It was only a couple of weeks ago I decided I needed to take my own advice. I'd closed down my social media accounts in 2018 but still used Messenger and WhatsApp. Well, I had to message all of the contacts I speak to most often and make sure they had my phone number. I told them about Signal and then deleted my WhatsApp and Messenger accounts.

So far so good. Some of my contacts have also downloaded Signal and those that haven't have been in touch via iMessage or SMS. I'm not a tin-foil hat wearing, conspiracy theorist lunatic but I do believe in a certain level of personal privacy. Ultimately, the only way to get these companies to change their behaviour is to walk away. Unfortunately, most people won't but at least I'm able to say I did my miniscule part for something I believe in.
Score: 9 Votes (Like | Disagree)

orbital~debris
Decided on trying Signal yesterday and I downloaded it.

The whimsical/customisation features it lacked made me want to choose Telegram, but the stronger privacy credentials had to override that.

Pleased that these new features make it a choice with less compromise.
Score: 7 Votes (Like | Disagree)

I am probably one of the exceptions. I don’t need the fancy wallpaper and animated stickers, in order to message with someone. However, if adding these features helps get customers off WhatsApp and Messenger, that is a great thing.

Agreed. I don’t need them either (I suppose they’re ‘nice to haves’ for me).

The main reason those features are a good thing in my book is they make the app likely to be accepted by more people, which in turn hopefully makes the platform more viable to replace WhatsApp/Messenger for many.

I have a family member who moved away from iPhone, so a cross platform app was required for group family chat. WhatsApp was used almost by default…
I’ve wanted to move to an alternative. To do that, aside from the “everyone’s on it” barrier - admittedly, a big one - other problems to overcome are the lack of feature parity (perceived or otherwise). This update should help with that.
Score: 6 Votes (Like | Disagree)

Recently got my family to switch to Signal from WhatsApp (never thought that would happen). First thing I hear is how it doesn't have wallpapers - I never used them myself but that's important to people :).

Very cool ad! That actress was great in Person of Interest! Go Signal!
Score: 6 Votes (Like | Disagree)
Read All Comments

Monday June 21, 2021 6:33 am PDT by Joe Rossignol
Apple will likely unveil its next-generation "iPhone 12s" or "iPhone 13" lineup in around two and a half months from now, and ahead of time, Taiwanese research firm TrendForce has outlined its expectations for the devices. A summary of TrendForce's expectations:Apple will unveil four new iPhones in September, including a mini model, a standard model, and two Pro models. September is the...
Read Full Article • 57 comments