With more and more Android smartphone vendors coming out with their take on the foldable phone concept, and Apple rumors swirling about a possible future foldable iPhone, Google appears keen to get in on the act as soon as this year with its first foldable Pixel device. 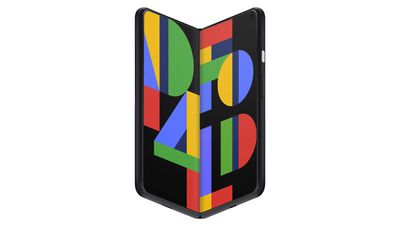 MacRumors concept render
According to a new report by The Elec, Samsung is in the process of developing in-folding foldable OLED panels to supply to Oppo, Xiaomi, and Google. The panels are said to be destined for use in devices to be launched later in 2021, and Google has reportedly requested Samsung Display develop a foldable OLED panel around 7.6-inches in size.

Documents leaked in August last year suggested Google plans to release a foldable pixel phone in the fourth quarter of 2021. Google confirmed in 2019 that it is developing technology that could be used in foldable devices, although at the time the company played down the prospect of actually launching a foldable, saying it didn't see "a clear use case yet."

That said, Google develops the software that has to run on all Android foldable devices, which would put it at a distinct advantage when it comes to foldable hardware-software integration.

Today's report adds further support to the prospect of a Google foldable, which will use the now more commonly preferred in-folding design, demonstrated most recently by the Xiaomi Mate X2, whose predecessor was out-folding by comparison. According to Xiaomi, advances in hinge technology and materials used in the Mate X2 allow for a seamless fold without a gap and eliminate the problem of display creasing.

Samsung was first to launch a consumer foldable device, but the 2019 Galaxy Fold suffered from major design issues including display creasing and panel breakages along the hinge due to the ingress of debris and other issues.

Thanks to lessons learned from the design of the Fold, Samsung improved the design and eventually brought the Fold back to market. The company has since released foldable flip phones - most recently the clamshell-style Galaxy Z Flip.

Samsung has historically been a key supplier to Apple, providing the OLED screens for iPhones. The company intends to dominate the foldable display market as a supplier, and was considering a move to step up production to 10 million units a year depending on demand.

Apple has been known to be working on foldable display technology for some time, filing multiple patents regarding the technology, and rumors have also floated around LG's potential involvement.

The repeated insinuation of Samsung's involvement and orders being placed by Apple offers a more concrete suggestion that work on a foldable ‌‌iPhone‌‌ is continuing at pace, with some rumors suggesting a release as early as 2023.

ninethirty
If foldable phones aren't the biggest solution in search of a problem I've ever seen, I don't know what is.
Score: 17 Votes (Like | Disagree)

DanTSX
Nobody will do foldables well until Apple does them. Everyone will complain about foldables being a gimmick up until that point. Then they will suddenly reverse opinion once Apple does a foldable.
Score: 10 Votes (Like | Disagree)

Well now that Samsung have successfully released their Z flip, and now Google are jumping in the bandwagon, Apple need to follow suit with their own improved version ASAP.

I’m afraid to see the price of Apple’s version. I know it will likely be quality but whew. Maybe they should wait another year or two. Lol.
Score: 7 Votes (Like | Disagree)

what is this obsession. who wants this? awkward square size. fragile overpriced phone

This is why :D

snipr125
Members are saying that a foldable iphone is a solution looking for a problem, but if something the size of a (thick) credit card that fits in your pocket, but can then fold open to a 6.5" screen, then isn't this a solution to a problem?!? i.e Largest possible screen size in a very, very compact form factor.
Score: 5 Votes (Like | Disagree)

Optheduim
I am ITCHING for clamshell style iPhone.
Score: 5 Votes (Like | Disagree)
Read All Comments