The U.S. Patent and Trademark Office published an Apple patent on Tuesday that shows the company has been researching a foldable iPhone design that uses a flexible OLED display.

First spotted by AppleInsider, a patent titled "Flexible display devices" describes an iPhone design that folds in two when not in use, reminiscent of the old clamshell cellphones Motorola used to make in the 1990s. 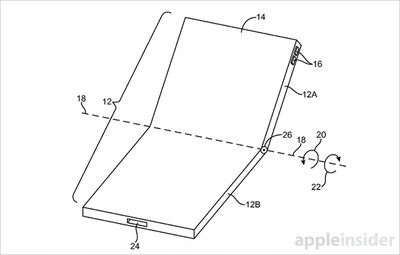 Apple's version utilizes a number of flexible parts including an OLED and a hinged metal support structure, made in one example of a nickel and titanium alloy known as nitinol, which has special elastic properties. Flexible polymers are used in alternative embodiments.

Apple envisions that the upper housing could include cameras, display controllers, speaker modules and light sensors, with the lower section of the chassis containing microphones, CPU and graphics processor, along with vibrating and other typical smartphone mechanisms.

The two sections connect via a single- or multi-shaft hinge that allows them to rotate relative to each other, while flexible printed circuit boards keep the connection intact. The flexible display meanwhile runs over the two sections and includes extra material to support two or more folding configurations.

Apart from the the more familiar clamshell folding system, the patent describes how the display could fold outward, allowing both halves of the screen to remain accessible when the phone is closed shut. This second configuration also includes clips for fixing to the user's clothing.

Later in the patent, Apple explores other more elaborate embodiments including a two-hinge design vaguely reminiscent of a Jacob's Ladder toy, and goes on to consider cover glass and viewing angle details.

The patent is more a point of interest rather than an indication that Apple is set to release a foldable phone, however the research could make its way into other products. The technology could be implemented in a large iPad that folds away, for example.

In addition, next year's 10th anniversary "iPhone 8" is expected to include a flexible OLED display, but the traditional overall form factor will most likely remain.

dannys1
I yearn for the day where we carry around tiny phones again...perhaps foldable is the answer eventually.
Score: 14 Votes (Like | Disagree)

Oh no. Samsung will come out with this first now that it is reported here.

goomba478
It's so funny, when watching WestWorld yesterday they had something almost exactly like this and I thought to myself, " I could totally picture Apple making something like this." Make it happen ^_^.
Score: 8 Votes (Like | Disagree)

Zackmd1
If anyone wants to see how something like this could be used, watch WestWorld! In WestWorld, there is an iPad sized device that can fold up via a two hinge mechanism into something about the size of a iPhone plus. I would love to have something like this! Maybe one day.....
Score: 6 Votes (Like | Disagree)

Wednesday July 8, 2020 3:14 pm PDT by Juli Clover
Apple is working on Macs that use its custom Apple-designed Apple Silicon chips instead of Intel chips, but Apple has committed to continuing to support Thunderbolt, reports The Verge. In a statement, an Apple spokesperson said that Apple's upcoming machines will offer support for Intel's Thunderbolt USB-C standard. "Over a decade ago, Apple partnered with Intel to design and develop...
Read Full Article • 210 comments