Samsung's foldable smartphone, the Galaxy Fold, is now set to launch in September after being delayed in order for Samsung to make some design changes, Samsung announced today.

The new version of the Galaxy Fold features several design and construction improvements. The top layer, which was mistakenly peeled off by some reviewers, has been tweaked to make it clear that it's part of the display, while additional reinforcements have been added to better protect the display from external particles. 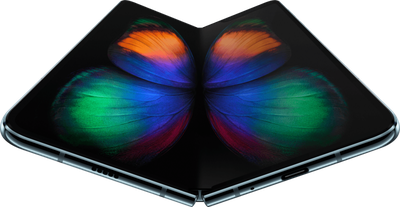 The full changes Samsung made to the Galaxy Fold are listed below:

The top protective layer of the Infinity Flex Display has been extended beyond the bezel, making it apparent that it is an integral part of the display structure and not meant to be removed.

The top and bottom of the hinge area have been strengthened with newly added protection caps.
- Additional metal layers underneath the Infinity Flex Display have been included to reinforce the protection of the display.
- The space between the hinge and body of Galaxy Fold has been reduced.

The company says it has also been working to improve the overall Galaxy Fold user experience, optimizing more apps and services for the foldable interface.

Samsung initially planned to launch the Galaxy Fold this spring, but ended up delaying the launch after several reviewers experienced broken Galaxy Fold devices after just a few days.

Some of the reviewers mistakenly pulled off the top layer of the display as it looked like a plastic screen protector, which led to display damage. Other reviewers had screen failures, while still others saw display damage due to small particles of dust getting in between the layers of the display.

Based on the changes Samsung made to the Galaxy Fold, it sounds like each of the individual issues has been addressed, and hopefully launch versions of the Galaxy Fold will hold up better than the initial review units.

Samsung says that the Galaxy Fold will be made available to consumers starting in September in select markets, with specific launch details to be shared as a launch approaches.

Samsung's Galaxy Fold, which will be one of the first foldable smartphones on the market, will cost $1,980 when it becomes available for purchase.

Kobayagi
Hmm, let's see how this will unfold.

elvisimprsntr
Am I the only one who still doesn't see the point? SG Fold is a solution looking for a problem, instead created it's own problems in the process.
Score: 28 Votes (Like | Disagree)

Ferc Kast
"Following Design Revisions"...you mean, like removing the fold? :confused: I'm not holding my breath that this batch will be any better, given that Huawei was having issues with the technology too. Still just a half-baked idea, imho, that shouldn't have gotten past R&D yet.
Score: 25 Votes (Like | Disagree)

Am I the only one who still doesn't see the point? SG Fold is a solution looking for a problem, instead created it's own problems in the process.

The point seems pretty obvious to me. I wish Apple still had the balls to try stuff like this. I look at the Apple rumor roadmap and I think my Iphone X will be with me for a while longer.
Score: 16 Votes (Like | Disagree)

The point seems pretty obvious to me. I wish Apple still had the balls to try stuff like this. I look at the Apple rumor roadmap and I think my Iphone X will be with me for a while longer.

I wouldn't be shocked if Apple has at least two dozen prototypes of a folding phone similar to this one in their labs. And passed on brining it to market for a variety of reasons.

Personally...If Samsung's folding phone, when folded, is thicker than my iPhone X, that would not interest me at all.
Score: 16 Votes (Like | Disagree)
Read All Comments

Friday September 30, 2022 12:51 pm PDT by Juli Clover
Apple CEO Tim Cook has been touring Europe this week, sitting down for interviews with various media publications. Augmented reality has been a running theme in Cook's discussions, and it is a topic he brought up again in an interview with Dutch publication Bright, which is part of RTL News. "I think AR is a profound technology that will affect everything," Cook said, echoing comments from...
Read Full Article • 317 comments