Chinese smartphone company Huawei has today unveiled its latest foldable smartphone, the Mate X2, at a special event in China. 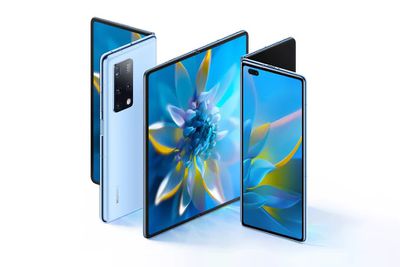 The successor to 2019's Mate X, the phone has received a radical redesign and now features a large uninterrupted 8-inch screen that folds inwards, rather than having the main display on the exterior, as with the original device.

The main screen uses a 180Hz display with an 8:7.1 aspect ratio, and when the phone is folded, a second 6.45-inch display (with a 12:9 aspect ratio) on the outside can be used, similar to Samsung's Galaxy Fold design. Both displays feature a wide color gamut and an ultra-low reflection feature that bests the reflectance level of Apple's Pro Display XDR, claims Huawei.

In a neat-looking innovation, a new multi-dimensional hinge design allows for a "seamless" fold without a gap, using a water drop-shaped cavity that houses the fold inside. Its dual-spiral structure is made from high-intensity steel that "eliminates the problem of display creasing," and also enables a 40% flatter panel design, claims Huawei.

The camera module is housed in the thickest part of the phone, which tapers off. However, despite the tapering design, the device folds in a uniform left and right fashion, so that the taper is not apparent when closed. The majority of the handset's mass is also on the right side of the phone to make it easier to hold when unfolded in either portrait or landscape.

The Mate X2 is powered by the Kirin 9000 5G chip, which debuted in Huawei's Mate 40 Pro last year. It's supported by 8GB of RAM, and a 4,400mAh battery that can be fast-charged at up to 55W. The device also supports dual-SIM 4G/5G use, and comes supplied with a leather case featuring a kickstand.


It's unlikely that the Mate X2 will be available in the United States, given Huawei's conflicts with the U.S. government. At any rate, the Mate X2 will launch without support for Google's apps or services, which is likely to limit its appeal outside of China.

There have been several rumors suggesting that Apple is exploring folding screen technology. Apple's rumored foldable ‌iPhone‌ has been said to feature an OLED display from Samsung, according to reports of internal durability testing and display sample orders.

Given the influx of multiple folding smartphones coming to market and the uptick in rumors, Apple is surely looking into the feasibility of its own similar device. Rumors about Apple working on a foldable ‌‌‌iPhone‌ actually‌‌ date back to 2016, and the company has filed a significant number of patents related to a foldable ‌‌iPhone‌‌.

MrGimper
Yay another too thick/too big phone, that transforms into a too small tablet.

Yay another too thick/too big phone, that transforms into a too small tablet.

It's actually not all that huge.

bbplayer5
Maybe I am in the minority here, but i don’t really want a phone that opens up like that.
Score: 7 Votes (Like | Disagree)

anthonymoody
Man when Apple cracks the code on this it's gonna be a serious take my money situation. I'm concerned about the weight, but effectively having an iPad mini living inside my iPhone would be awesome.
Score: 7 Votes (Like | Disagree)

Phil A.
The idea of a foldable phone really appeals to me (possibly just the novelty factor), but they have too many compromises at the moment and the prices are beyond ridiculous at this stage.