Rumors that Apple is in negotiations with Hyundai about developing an Apple Car have been in the air over the last few weeks, and a new Reuters report today provides further details on the state of play between the two companies. 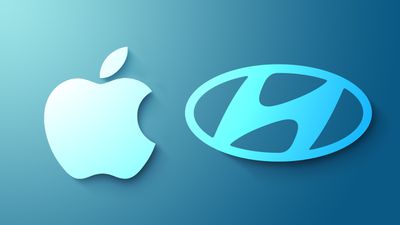 According to the report, the outlook for a deal has dimmed because Hyundai executives are divided over the prospect of working with Apple. Hyundai's main concern is that it could become a contract manufacturer for another brand.

"We are agonizing over how to do it, whether it is good to do it or not," said a Hyundai executive aware of the internal discussions on the tie-up with Apple. "We are not a company which manufactures cars for others. It is not like working with Apple would always produce great results."

According to the report, Apple and Hyundai first started talks over a car partnership in 2018, when Apple's car project was headed by Alexander Hitzinger, who now works for Volkswagen. However, progress in the talks has been hampered by Hyundai's historical reluctance to work with other companies.

"It is really difficult (for Hyundai) to open up," this person said, adding that the South Korean company would likely to have to replace some executives to avoid a culture clash under any partnership with Apple.

Despite its reluctance, Hyundai is said to have excess capacity, therefore contract manufacturing would help it secure production volume.

Apple reportedly wants to source major components of its own design – frames, bodies, drive trains, and other parts – from a variety of places and rely on Hyundai or Kia, a Hyundai Motor Group affiliate, for a final assembly site. Previous reports also suggested that Kia's Georgia plant in the U.S. could become the production base, which would suit Apple better.

Rumors that Apple is in negotiations with Hyundai first surfaced earlier this month‌, suggesting that Apple is planning to work with the automaker to produce electric vehicles and develop batteries due to the high costs of the technology and the necessary production facilities.

Hyundai initially confirmed its electric vehicle discussions with Apple in a statement to CNBC, but the statement was revised hours later with no mention of Apple. Apple has not commented on reports of the negotiations.

Apple and Hyundai reportedly want to reach a partnership agreement for the upcoming ‌Apple Car‌ by March, although today's report seems to cast doubt on any deal being signed off anytime soon.

Apple is evil. Let them ruin WV. I hope Hyuindai will avoid the partnership and make the car with Samsung.

Why do you want to ruin the state of West Virginia and how is that state involved here?
Score: 19 Votes (Like | Disagree)

Is that you, Steve Ballmer?
Score: 13 Votes (Like | Disagree)

CJM
Apple wants to have their cake and eat it in typical Apple fashion. They wanna make a car, they don't want to be involved with the hassle of making said car. They probably want Hyundai to organise servicing as well. But with Apple branding everywhere and next to no mention of Hyundai.

That's how Apple does business. We've heard time and time again of how Apple treats contractors. Doing the same for the business of car-making is going to be difficult but also 'optimal' for them. Max profits, max brand exposure, min costs and overhead.

Tesla, at least, built their company from the ground up.
Score: 10 Votes (Like | Disagree)

DBZmusicboy01
What starts out bad. Will end up bad.
Score: 8 Votes (Like | Disagree)

Hyundai...I mean, it'd be nice if they partnered with a car company that made fun to drive vehicles like Audi or Infiniti.

Audi can be fun to watch. Some winters ago, roads full of snow, and I spotted an Audi R8 that had gone off the road, hit a lamp post, and hit it from the wrong side! I'm sure that Audi was fun to drive. Until the driver found out that he couldn't actually drive :-) Made me smile.