Apple's inclusion of Ultra Wideband chips in its devices has driven growth in research into the technology and its potential applications, according to a new report by DigiTimes. 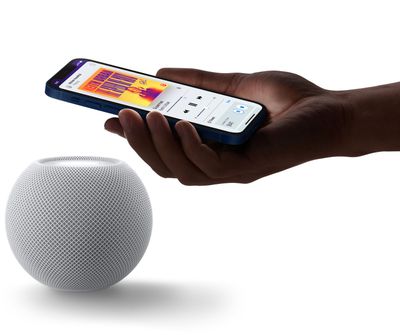 Ultra Wideband is a short-range, low-power radio technology that is able to provide more precise indoor positioning than Bluetooth LE and Wi-Fi. The distance between two UWB devices can be measured precisely by calculating the time that it takes for a radio wave to pass between them.

Apple's iPhones have included it in the last two series via its custom U1 chip, with other Apple products also supporting UWB. According to today's report, Apple's promotion of Ultra Wideband has been the driving factor behind increased take-up of the technology:

Apple's HomePod 14.4 beta is set to introduce new HomePod mini music handoff functionality that takes advantage of the U1 chip in the device: When an ‌iPhone‌ is near a ‌‌HomePod mini‌‌, it begins a soft haptic touch rhythm that gets faster and faster as the ‌‌iPhone‌‌ gets closer, until the interface to transfer a song between the ‌‌HomePod mini‌‌ and the ‌‌iPhone‌‌ opens.

This functionality will make handoff quicker and more reliable on a ‌‌HomePod mini‌‌ and an ‌iPhone‌ 11 or iPhone 12, thanks to the U1 chips that let the devices better understand where they are in relation to one another.

Apple's rumored "AirTags" will also feature ultra wideband tech, according to analyst Ming-Chi Kuo, while Tile is said to be planning to introduce an upgraded series of item trackers that include a UWB chip for more precise tracking.

Apple opened up its U1 chip to developers in iOS 14 with a "Nearby Interaction" framework, which can stream distance and relative direction between U1-equipped devices, paving the way for new spatial-related user experiences.

Just last week, BMW announced future plans to roll out Digital Key Plus, an enhanced version of Apple's Car Keys feature that incorporates Ultra Wideband technology, enabling drivers to unlock and start their vehicle without needing to take their ‌iPhone‌ out of their pocket or bag.

But with more and more products including the technology, there have been some notable (and surprising) exceptions: Apple's 2020 iPad Pro and new AirPods Max headphones don't include a U1 chip and therefore won't be compatible with future potential Ultra Wideband applications.

I believe the CEO's comment was meant in the reverse. Shaming the company for letting a "lifestyle company" beat them on their home turf. When Intel once reigned supreme.
Score: 11 Votes (Like | Disagree)

Mr Beardsley
I work at a company that relies on bluetooth, and it is horrible. Trying to get accurate ranging information of iBeacons or BLE beacons is very difficult. Speaking of Intel, their bluetooth hardware and drivers for Windows are so very bad. Ever wonder why all the wireless mice come with their own radio transmitter unlike Apple's Magic Mouse? At least on Apple bluetooth is mostly reliable.
Score: 7 Votes (Like | Disagree)

The HomePod mini is awesome!

The potential for Apple’s U1 chip is huge! Looking forward to future improvements!

I'm blown away by the difference in 1 mini vs 2 minis. The 2 minis stereo-paired really make a great sound.
Score: 6 Votes (Like | Disagree)

The potential for Apple’s U1 chip is huge! Looking forward to future improvements!
Score: 5 Votes (Like | Disagree)

What's awesome about it over a regular BT speaker, like a JBL Charge or something? I'm trying to find a reason to replace mine with this, but couldn't come up with any just yet.

HomePods (including the Mini) are unique in that they're always on, waiting for a user command. And require no other device being nearby, powered on, booted up, and connected. Such as a computer, phone, tablet, etc.

From 20 feet away I can say a command like, "Siri, play blues," and within a couple seconds be treated to a nice collection of all I can eat blues music via Apple Music. That's just a simple example. I could also say, "Siri, play Cross Road Blues by Robert Johnson." And it just happens, with no other devices being powered up and connected (except, obviously, a WiFi and internet connection).

A regular bluetooth speaker cannot give me the above experience. That's why I own five HomePods (and two Minis) in different rooms.
Score: 4 Votes (Like | Disagree)

No one said that.

Well media reports have stated the new Intel CEO did indeed utter those words to his staff. Apparently he said, “We have to deliver better products to the PC ecosystem than any possible thing that a lifestyle company in Cupertino makes. We have to be that good, in the future.” Check out the article in TechRadar.
Score: 4 Votes (Like | Disagree)
Read All Comments