BMW today announced future plans to roll out Digital Key Plus, an enhanced version of Apple's Car Keys feature that incorporates Ultra Wideband technology, enabling drivers to unlock and start their vehicle without needing to take their iPhone out of their pocket or bag. BMW says the feature will first launch in its new iX electric vehicle, slated to launch in Europe in late 2021 and in North America in early 2022. 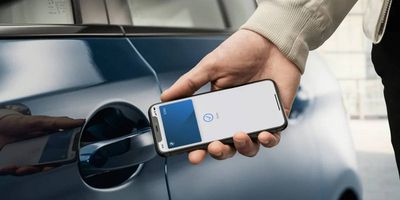 Apple introduced support for digital car keys in iOS 13.6 and later last year, and BMW was the first and to date only automaker to roll out the feature, starting with the 2021 5 Series and later to a wider range of BMW models manufactured after July 1, 2020. BMW's current Digital Key feature is based on NFC technology and requires drivers to hold their iPhone near the driver's side door to unlock their vehicle.

Ultra Wideband is a short-range, high-bandwidth wireless communication protocol with precise spatial awareness, meaning that an iPhone will only need to be in the vicinity of the vehicle in order to unlock and start it. BMW says Ultra Wideband's precision also ensures that relay attacks, where the radio signal is jammed or intercepted, are not possible.

Apple started rolling out Ultra Wideband support to some of its devices in 2019 with the U1 chip in iPhone 11 models, followed by iPhone 12 models last year. Apple Watch Series 6 models are also equipped with a U1 chip, and given that Apple's car key feature is available on watchOS 6.2.8 and later, BMW's Digital Key Plus feature could extend to the Apple Watch.

As announced last year, BMW's press release confirms that Apple and BMW have been working closely with the Car Connectivity Consortium to establish the Digital Key 3.0 specification with Ultra Wideband, providing a global standard for the automotive industry.

In related news, Business Korea today claimed that Hyundai plans to adopt Apple's digital car key feature later this year, but the report did not indicate whether Hyundai plans to roll out the NFC or Ultra Wideband version of the feature. Similar to credit cards and boarding passes, digital car keys are stored in the Wallet app on the iPhone and Apple Watch.

Just make the key smaller so it's easier to carry. Using your phone to unlock is a stupid idea since the cellphone's battery don't last long. Everyday you risk not being able to enter your car!

This even works when the phone is „officially“ dead for some time.
Also, when was the last time your phone ran out of battery?
Score: 14 Votes (Like | Disagree)

richardamp
As a Tesla driver who has been able to use a similar feature for years, I can say that not having to carry a key fob is really, really great. This is an innovation that truly adds value.

I use the MagSafe wallet for my iPhone, so now I just carry one item that is my phone, wallet, and car key. I love it and could never go back!
Score: 11 Votes (Like | Disagree)

As with credit cards, and now car keys, the real thing is easier imho.

It's easier to reach in my pocket and grab a card for contactless payment (rather than faffing around with biometrics, double tapping a home button, and whatnot on my phone).

It's also easier to just have a standard car key with a button you press to unlock your car.

You don't need to take out car key on modern cars. The doors have a sensor that auto unlocks when your hand grips the door handle.
Score: 10 Votes (Like | Disagree)

What’s the point of this if you already have keyless entry and push start. ?‍♂️

not having to carry the key with you. just about that.
Score: 7 Votes (Like | Disagree)
Read All Comments