Apple's worldwide Mac shipments grew massively in the fourth quarter of 2020 after the launch of three new Macs with the M1 chip, according to new PC shipping estimates shared by Gartner. Apple shipped an estimated 6.9 million Macs, up from the 5.25 million it shipped at the same time in 2019, marking significant growth of 31.3 percent. 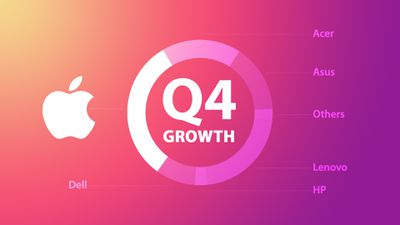 In the United States, Apple was similarly the fourth-top PC vendor with 2.7 million PCs shipped, up from two million in 2019 for a total of 32 percent growth. HP, Dell, Lenovo, and Microsoft also saw significant growth in U.S. shipments.

It is important to contextualize growing Mac sales in the fourth quarter of 2020 with the launch of the M1 Macs, which include the ‌M1‌ MacBook Air, MacBook Pro, and Mac mini. Being one of the most significant updates to the Mac lineup to date, the introduction of the first Macs with Apple Silicon processors appears to have substantially bolstered growth.

Across the entirety of 2020, Apple shipped an estimated 22.5 million Macs worldwide, marking 22.5 percent growth compared to 2019, when it shipped 18.3 million Macs. Apple was also the number four vendor for the entire year, trailing Lenovo, HP, and Dell.

IDC also released its own shipping estimates, noting similar significant growth for Apple and other vendors. According to IDC, Apple shipped an estimated 7.4 million Macs, up from 4.9 million in the year-ago quarter for estimated growth of 49.2 percent. Across 2020, IDC suggests Apple shipped 23 million Macs, up 29.1 percent from the 18 million that it shipped in 2019.

Data shared by Gartner and IDC is based on estimates and is not an exact representation of Apple's actual sales. That said, these estimates have historically been fairly accurate. It used to be possible to confirm estimated data when Apple provided quarterly earnings results with actual Mac sales figures, but the compny no longer breaks out unit sales for the iPhone, iPad, and Mac, making it impossible to determine exact sales numbers.

Mac growth could continue to rise significantly this year as Apple continues to overhaul its Mac lineup with ‌Apple Silicon‌ chips. The next models expected to see ‌Apple Silicon‌ upgrades are the 14 and 16-inch MacBook Pros and the iMac.