HomePod, released in February of 2018, is Apple's smart speaker, designed to compete with popular offerings like the Google Home and Amazon Echo. The HomePod focuses heavily on sound quality, with a 7 tweeter array, an Apple-designed 4-inch upward-facing woofer, and an A8 chip that enables powerful spatial awareness features for excellent sound no matter where the HomePod is placed in the room. 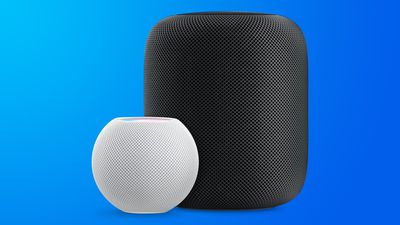 Apple's HomePod is normally priced at $299, but while we've occasionally seen sales as low as $199, we haven't yet seen any significant sales from major retailers for Black Friday, so keep checking back to see if we discover any great discounts on it.

While it's not a straight cash discount, there is one solid HomePod deal for Black Friday, and that's straight from Apple. As part of its four-day shopping event running from November 27–30, Apple is offering a bonus $100 Apple gift card with the purchase of a HomePod. The gift card is good not only on future product purchases at Apple, but also on apps, iTunes Store content, and other Apple services, so if you're an Apple fan it's likely the gift card is as good as cash.

OWC also offers discounted HomePods in white for $209.88 and black for $219.88. This is about the only straight cash discount we've seen around Black Friday, but Apple's gift card deal is better if you can make use of it. Also be aware that OWC's HomePods come in non-retail packaging and with a one-year warranty through OWC rather than Apple's normal warranty.

In addition to the full-size HomePod, Apple has just released the $99 HomePod mini, a much smaller and more affordable version of the original Apple smart speaker, but with the product being so new and even Apple having trouble meeting demand for new orders, we're not expecting to see any discount on that one.

Friday November 26, 2021 5:09 am PST by Mitchel Broussard
Black Friday is in full swing today, and in this article we're highlighting some of the best deals that you can find online among popular third-party accessory makers like Twelve South, Nomad, Satechi, and many more. Visit our Black Friday Roundup for a deeper dive into the best sales going on today. Note: MacRumors is an affiliate partner with some of these vendors. When you click a link and...
Read Full Article • 5 comments

Monday October 25, 2021 9:59 am PDT by Juli Clover
Alongside the iOS 15.1 update that was released today, Apple has introduced a new 15.1 software update that's designed for the HomePod and the HomePod mini. The HomePod update introduces Lossless Audio and Dolby Atmos Spatial Audio to Apple's HomePods, bringing them in line with other devices that have supported the features since earlier this year. Lossless Audio is available on both the...
Read Full Article • 85 comments

Wednesday November 10, 2021 12:05 pm PST by Mitchel Broussard
Black Friday is now just a few weeks away, and some stores have begun revealing the deals that you can expect to shop during the event. Of course, Black Friday is also getting earlier each year, and at Walmart you can start saving today. Note: MacRumors is an affiliate partner with Walmart. When you click a link and make a purchase, we may receive a small payment, which helps us keep the site...
Read Full Article • 32 comments

Thursday November 25, 2021 7:01 am PST by Joe Rossignol
Apple's annual four-day Black Friday through Cyber Monday shopping event has begun in Australia and New Zealand, with customers able to receive a free Apple gift card with the purchase of select products through November 29. The promotion is available on Apple's online store, in the Apple Store app, and at Apple Store locations in Australia. As usual, refurbished products are not eligible...
Read Full Article • 47 comments

Monday November 22, 2021 1:06 pm PST by Mitchel Broussard
Although Black Friday isn't technically until November 26, retailers released a slew of deals over the weekend. It's not always clear if particularly good deals will last all the way through Black Friday and Cyber Monday, or disappear before the shopping holidays, so in this article we're highlighting all of the best Apple-related sales you can get as of today. If anything interests you, we...
Read Full Article • 26 comments

Tuesday December 14, 2021 6:18 am PST by Mitchel Broussard
Target has a few Apple-related deals going on today only, headlined by a $20 markdown on the HomePod mini. You can get the smart speaker for just $79.99, down from $99.99. Note: MacRumors is an affiliate partner with some of these vendors. When you click a link and make a purchase, we may receive a small payment, which helps us keep the site running. This sale is available in Space Gray and ...
Read Full Article • 29 comments