In a new report, Bloomberg's Mark Gurman has laid out Apple's current succession planning for the company's senior leadership roles. The report explains that Apple is increasingly devoting attention to developing a "new generation of leaders" who will eventually take over senior roles in the company. 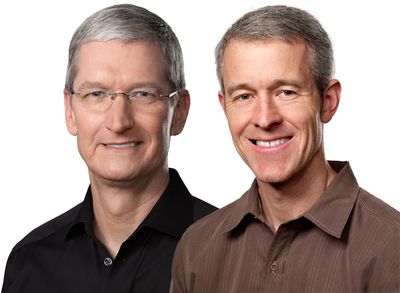 Amid increasing awareness that CEO Tim Cook and his management group of senior vice presidents are aging and nearing retirement age, Gurman's sources explained that Apple has undertaken substantial corporate planning to line up a younger generation of leaders. The report outlines several major features of the succession plan.

Most strikingly, the report claims that current Chief Operating Officer Jeff Williams is primed to take over as CEO if ‌Tim Cook‌ were to retire imminently. Williams is "seen as the heir apparent" within the company, having run Apple's global operations under Cook's leadership. Previously, he spearheaded development of the Apple Watch and various health initiatives, and has recently begun oversight of hardware and software design.

Crucially, Williams is said to be seen as much like Cook in terms of "pragmatic" leadership style, as an "an operations-focused executive like Cook rather than a product visionary like Jobs or former design chief Jony Ive." Gurman has previously stressed the growing importance of Williams to the company.

Beyond the role of CEO, Gurman highlights how the "smart money" is on the newly appointed vice president of iPhone marketing, Kaiann Drance, taking over from Apple's current marketing chief executive Greg Joswiak, who took over from Phil Schiller in August.

Although the report cautions that Craig Federighi is still the youngest member of Apple's executive team and is likely to remain in his role for several more years, two individuals are lined up to fill his role. Sebastien Marineau-Mes, vice president of Intelligent Systems Experience, and Jon Andrews, who was named a vice president to lead CoreOS in 2019, are apparently seen as most likely to be promoted when necessary.

Apple's various services, such as Apple Music, Apple TV+, iCloud, and Apple Maps, are led by senior vice president Eddy Cue. Peter Stern, who joined Apple in 2016 from Time Warner Cable, is said to be the preferred replacement. Stern currently supervises Apple's original programming efforts, Apple News, Apple Books, ‌iCloud‌, and the company's advertising platforms. He also directly handled the development of the improved Apple TV app in 2019 and is reportedly "leading the charge" on the new "Apple One" subscription service bundles.

While most senior roles now seem to have a successor attached, the report also highlights Apple's contingency options in the case that the preferred individual is unavailable.

As many of Apple's senior executives approach retirement age, and major figures such as Phil Schiller and Jony Ive depart their roles, it is interesting that Apple is conscientiously planning for a wave of similar exits in the immediate future.

ghostface147
I guess they ignored my résumé
Score: 35 Votes (Like | Disagree)

They need someone who is:
[LIST=1]
* Hungry
* Foolish
* Willing to take risks and who has a forensic eye for detail

kycophpd
I don’t believe any of this until Prosser says it.

Then I REALLY don’t believe it.
Score: 27 Votes (Like | Disagree)

markcres
They need someone who is:
[LIST=1]
* Hungry
* Foolish
* Willing to take risks and who has a forensic eye for detail
Score: 26 Votes (Like | Disagree)