Apple's longtime head of design, Jony Ive, is leaving the company to start his own design firm, Apple announced today. Though Ive is leaving, Apple will be one of Ive's "primary clients," which means Ive will continue to do design work for the Cupertino company.

In a statement, Apple CEO Tim Cook said that he is looking forward to working with Ive "long into the future." 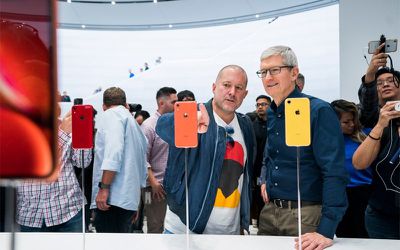 "Jony is a singular figure in the design world and his role in Apple's revival cannot be overstated, from 1998's groundbreaking iMac to the iPhone and the unprecedented ambition of Apple Park, where recently he has been putting so much of his energy and care," said Tim Cook, Apple's CEO. "Apple will continue to benefit from Jony's talents by working directly with him on exclusive projects, and through the ongoing work of the brilliant and passionate design team he has built. After so many years working closely together, I'm happy that our relationship continues to evolve and I look forward to working with Jony long into the future."

Williams has overseen the development of the Apple Watch since its inception, and following Ive's departure, will spend more of his time working with the design team.

Ive said in a a statement that over the course of the last 30 years, he has worked to build a strong design team and culture at Apple, which is stronger and more talented today than at any point in Apple's history.

"After nearly 30 years and countless projects, I am most proud of the lasting work we have done to create a design team, process and culture at Apple that is without peer. Today it is stronger, more vibrant and more talented than at any point in Apple's history," said Ive. "The team will certainly thrive under the excellent leadership of Evans, Alan and Jeff, who have been among my closest collaborators. I have the utmost confidence in my designer colleagues at Apple, who remain my closest friends, and I look forward to working with them for many years to come."

There is no word on exactly when Ive will be departing Apple, as Apple's announcement simply says that he'll be leaving Apple as an employee later this year. In an interview with The Financial Times, Ive said his new company, created in partnership with Marc Newson, is called LoveFrom.

Apple will be LoveFrom's first client, and while Ive is departing, he said he will still be "very involved" for "many, many years to come." "This just seems like a natural and gentle time to make this change," he told The Financial Times.

In a separate announcement, Apple has named 24-year Apple veteran Sabih Khan to the executive team as a senior vice president of operations. He will be in charge of Apple's global supply chain, ensuring product quality and overseeing planning, procurement, manufacturing, logistics and product fulfillment functions, as well as Apple's supplier responsibility programs. He will continue to report to COO Jeff Williams.

In a statement, Apple CEO ‌Tim Cook‌ said "Sabih leads our Ops team with heart. He and his entire worldwide team are committed to delivering unmatched experiences to our customers, treating workers everywhere with dignity and respect, and protecting the environment for future generations."

DevNull0
Can we please have someone who has more design objectives than "make it thinner". Enough of the literally 2-dimensional thinking.
Score: 152 Votes (Like | Disagree)

fenderbass146
Jony! Thanks so much for some awesome designs through the years. With that said, I'm not sad to see him go, seems Apple has been fashion over function in the recent years. Ready to see what the next page in Apples history has to offer.
Score: 92 Votes (Like | Disagree)

drinkingtea
Oh, wow. This is a historic moment in Apple history.
Score: 71 Votes (Like | Disagree)

Long over due.
Score: 56 Votes (Like | Disagree)
Read All Comments