Apple today seeded the seventh betas of upcoming iOS 14 and iPadOS 14 updates to developers for testing purposes, a little over one week after seeding the sixth betas and over two months after unveiling the new software at the WWDC keynote. 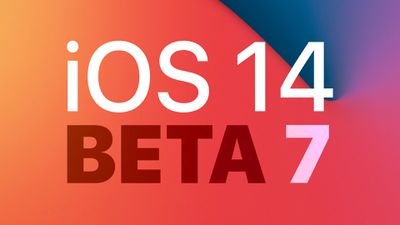 There are tons more features in iOS 14 and iPadOS 14, so make sure to check out our iOS 14 roundup and our iPadOS 14 roundup for a full list of everything new. We also highlight all of the new feature tweaks and changes introduced with each beta iteration, and you can see the changes from beta 2, beta 3, and beta 4 in our beta 2, beta 3, beta 4, beta 5, and and beta 6 tidbits articles.

Beta 3 brought a new red Music icon, changes to the design of the Music Library in the Music app, a Clock widget, an updated Screen Time widget, while beta 4 added an Apple TV widget and improvements to search. Beta 5 introduced a larger Apple News widget option, a scrolling clock wheel for apps like Alarm Clock, an option to turn on Exposure Notifications, and a feature to better hide photo albums, while beta 6 added spatial audio settings.

Why are you so obsessed with this? No, GM is not coming that soon.
Score: 8 Votes (Like | Disagree)

Someone wrote on the beta thread that it was fixed.
Score: 3 Votes (Like | Disagree)

Has anyone checked if Apple Ad Anti-Tracking Features from this release?

It disappeared on my 11 Pro Max in the last DB, and is back now.

Curious to know how stable these releases are? Ready for primary device? Love to try it out this weekend.

Wednesday August 18, 2021 10:20 am PDT by Juli Clover
Apple today seeded new betas of iOS and iPadOS 15 to public beta testers, allowing non-developers to download and test the updates ahead of their fall release. The fifth public betas come one week after Apple released the fourth public betas. Public beta testers who have signed up for Apple's beta testing program can download the iOS and iPadOS 15 updates over the air after installing the...
Read Full Article • 32 comments