Apple today seeded the sixth betas of upcoming iOS 14 and iPadOS 14 updates to developers for testing purposes, one week after seeding the fifth betas and over two months after unveiling the new software at the WWDC keynote. 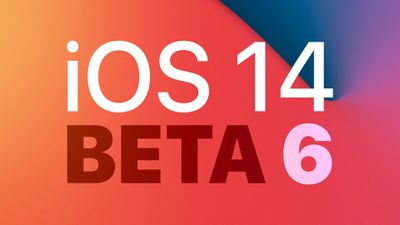 iOS 14 introduces a redesigned Home Screen that supports widgets on iPhone for the first time, plus ‌widgets‌ have been redesigned and can now be customized in three sizes through the new ‌widgets‌ gallery.

There are tons more features in iOS 14 and iPadOS 14, so make sure to check out our iOS 14 roundup and our iPadOS 14 roundup for a full list of everything new. We also highlight all of the new feature tweaks and changes introduced with each beta iteration, and you can see the changes from beta 2, beta 3, and beta 4 in our beta 2, beta 3, beta 4, and beta 5 tidbits articles.

Beta 3 brought a new red Music icon, changes to the design of the Music Library in the Music app, a Clock widget, an updated Screen Time widget, while beta 4 added an Apple TV widget and improvements to search. Beta 5 introduced a larger Apple News widget option, a scrolling clock wheel for apps like Alarm Clock, an option to turn on Exposure Notifications, and a feature to better hide photo albums.

WiseAJ
Does it break Fortnite for those that still have it on their devices?
Score: 13 Votes (Like | Disagree)

Goldfrapp
Wow, what a pleasant surprise!

I guess we're on a weekly schedule from now on.
Score: 9 Votes (Like | Disagree)

So we're getting closer to the final release! I can sense it.

TheYayAreaLiving ?
Thank you Apple! welcome aboard to weekly releases.
Score: 6 Votes (Like | Disagree)

I7guy
I think the most changes (and internal tuning) occur with these weekly releases. I don't think battery life has been stellar in the last few betas, ok, but not stellar. Let's see what this release brings.
Score: 5 Votes (Like | Disagree)

diamornte
I wonder if this beta update will still break the app/game "Animal Crossing: Pocket Camp." I wonder if Apple broke Animal Crossing & won't let it launch in this beta because they want their developers to be more productive?
Score: 5 Votes (Like | Disagree)
Read All Comments