Mac OS 8 is now available as an app for macOS, Windows, and Linux, reports The Verge. 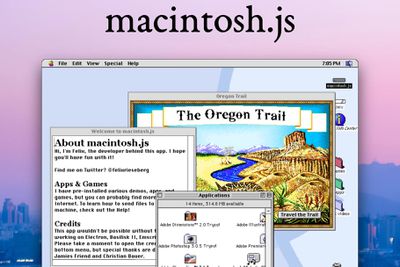 Slack developer Felix Rieseberg has transformed Mac OS 8 into a single downloadable app for modern macOS, Windows, and Linux devices. Having previously transformed Windows 95 into an app in 2018, Rieseberg turned his attention to transforming an entire 1991 Macintosh Quadra with Mac OS 8.1 into a single Electron app.

The app, titled "macintosh.js," is written entirely in JavaScript, and uses a virtual machine to emulate a Macintosh Quadra 900 with a Motorola CPU that Apple used before its transition to IBM's PowerPC architecture. The project has not been approved by Apple and is provided for educational purposes only.

The macintosh.js app includes a number of apps and games from a 1997 MacWorld demo CD, and includes Photoshop 3, Premiere 4, Illustrator 5.5, StuffIt Expander, and Apple’s Web Page Construction Kit. The app can also run classic games such as Duke Nukem 3D, Civilization II, Dungeons & Dragons, Namely, Oregon Trail, Alley 19 Bowling, and Damage Incorporated. Although Internet Explorer and Netscape are preinstalled, Rieseberg says the versions are so old that "you wouldn't be able to open even Google."

Originally released in 1997, Mac OS 8 represented a significant overhaul of classic Mac OS software, and integrated many of the technologies developed for Apple's cancelled Copland OS. Mired by delays, missed deadlines, and dysfunctional management, Copland was never commercially released and is regarded as one of the biggest IT project failures in history. Mac OS 8 was the remnant of Copland OS, and is credited with helping to modernize Mac OS while Apple developed Mac OS X.

Hobbyists have set about making classic versions of macOS available on modern devices in the past, such as the Internet Archive's collection of classic Macintosh software that can be emulated in a browser.

I think i still have everything saved off my old PowerBook 165...

Wonder if I can get it up and running again.

America was so much nicer then. Wonderful beyond what those who never experienced it can imagine.

Dustman
Awesome! Now do it for Mac OS 9 please! That old sheepshaver file that’s been shared for 10 years now is pretty rough.
Score: 16 Votes (Like | Disagree)

ksgant
I'm old enough to remember System 6 and later it's "Multifinder", which allowed the running of two programs at a time. Then the complete mess with multiple crashes with System 7. When System 8....sorry, "OS 8" came along, it fixed a lot of things, but it was still coopertative multitasking with no memory protections, which meant if something crashed, it could crash the entire system. So it was always "save save save" when working on anything. Do something, save. Do something a little more. Save. Etc etc.

We didn't get true multitasking until OS X, which was like a breath of fresh air, but even than took time to get everything over to it. And I realized I'm really old.
Score: 8 Votes (Like | Disagree)

wivey
You mean I can use Word Perfect again?!! - woowee :-) Just need to figure out how to hammer in my old floppy discs.
Score: 8 Votes (Like | Disagree)
Read All Comments

Sunday January 16, 2022 3:37 pm PST by Joe Rossignol
A bug in WebKit's implementation of a JavaScript API called IndexedDB can reveal your recent browsing history and even your identity, according to a blog post shared on Friday by browser fingerprinting service FingerprintJS. In a nutshell, the bug allows any website that uses IndexedDB to access the names of IndexedDB databases generated by other websites during a user's browsing session....
Read Full Article • 222 comments