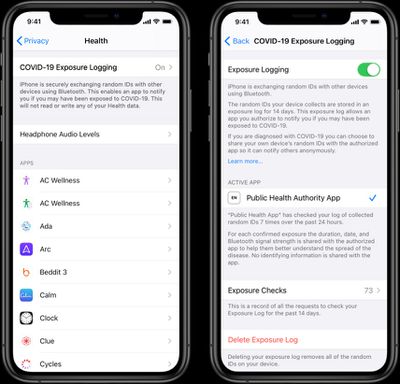 iOS and iPadOS 13.5 introduce the exposure notification API designed by Apple and Google, which is designed to allow public health authorities to create COVID-19 contact tracing apps that are meant to slow the spread of the virus.

The API Apple has introduced is for health-related apps, but there is an Exposure Logging toggle in the Settings app that is designed to allow users to opt out of participating in COVID-19 exposure notifications if a COVID-19 app is installed.

Along with laying the ground work for the exposure notification API and accompanying apps, iOS 13.5 makes it easier to unlock an iPhone with a passcode when wearing a mask, as many people are wearing face coverings at the current time.

With the update, the passcode interface pops up more quickly when an ‌iPhone‌ detects that a mask is obscuring the face after a user swipes upward, so it's quicker to get into an ‌iPhone‌ using a passcode than before.

There's a tweak to Group FaceTime, with Apple introducing a new toggle to disable the feature that automatically enlarges the tile of the person who is speaking. By default, Group ‌FaceTime‌ has a dynamic view with a tile for each person, and the person speaking has a larger tile while other tiles fade into the background.

An "Automatic Prominence" section in the ‌FaceTime‌ portion of the Settings app allows this to be disabled, displaying all of the people using ‌FaceTime‌ in a grid with equal-sized windows regardless of who is talking. A tile can be enlarged with a tap.

Apple in iOS 13.5 is adding a new feature for sharing Medical ID information automatically with emergency dispatchers when placing emergency call. There's a toggle to enable this function, along with an option to share Medical ID info on the Lock screen when an ‌iPhone‌ is locked.

Earlier betas introduced a new Apple Music feature that allows ‌Apple Music‌ songs to be shared on Instagram Stories. Tapping the Share button on a song in ‌Apple Music‌ creates a story with a song title, album name, and animated background, but at this time there is no way to get to ‌Apple Music‌ from the shared information.

iOS 13.5 also patches two security vulnerabilities that affect the Mail app on the ‌iPhone‌ and the ‌iPad‌. One vulnerability allowed an attacker to remotely infect an iOS device by sending emails that consume a significant amount of memory, while another allowed remote code executions.

The update fixes a bug that could cause the ‌iPhone‌ to crash when a specific text string in the Sindhi language is shared. It may also address an issue with Personal Hotspot that prevents it from working for some people and it could also fix a VPN-related vulnerability, both of which are bugs that Apple has promised to address in upcoming iOS updates.

jacobf7
People REALLY have to chill out about this contact tracing feature. Let me explain a few things:

* Contact tracing will be opted out by default and can only be turned on if you have an app from your public health authority that uses this Apple/Google API
* Your GPS location has literally nothing to do with this. It’s exchanging randomized Bluetooth keys that are very difficult if not impossible to trace back to one person. Neither Apple, Google, or your government can get your location from this contact tracing API.
* This is a good step in helping people know if they were exposed so they can take action early. Symptoms don’t show up for up to 14 days. If your phone can tell you if you were close to someone who has COVID-19 who could’ve possibly infected you before you even start showing symptoms, that is a very good thing.
* If you make the argument: “How are you supposed to know if that toggle switch is even trustworthy?” Then I respond with: if you can’t trust a simple toggle switch you can’t trust your phone entirely. Go get a flip-phone if you’re paranoid.
* And kind of unrelated but I just have to say it: 5G doesn’t cause coronavirus. Get a grip.
Score: 42 Votes (Like | Disagree)

Have you educated yourself on the "tracking" feature? If you did and you fully understand how it works, I would think you would want to help eradicate the spread of CV19.If you don't trust Apple, you can't trust that on/off toggle. Maybe time to NEVER update your OS again. Better buy a few spare phones as well, since all new devices will include this update.
Score: 19 Votes (Like | Disagree)

You do know you’re being tracked constantly by iOS if you use the maps app right ?????
Score: 13 Votes (Like | Disagree)

Will this be the last beta before IOS 14?

It could be or could be not, depending on if they release another update or not
Score: 11 Votes (Like | Disagree)

SAIRUS
Lets guess what they broke (this is just for fun)...
The Apple Music app deletes every 3rd photo when you hit play.
Score: 11 Votes (Like | Disagree)

You won’t be tracked. Only with an extra app you can install. It’s opted out all by default!!! Omg
Score: 8 Votes (Like | Disagree)
Read All Comments

Friday January 21, 2022 3:21 am PST by Sami Fathi
Apple will no longer include EarPods with every iPhone sold in France, starting on January 24, according to a notice posted by a French carrier (via iGeneration). Apple was previously required to include EarPods in the box with the iPhone due to a French law that required every smartphone sold in the country to come with a "handsfree kit," but the law has now been changed in favor of reducing the ...
Read Full Article • 149 comments