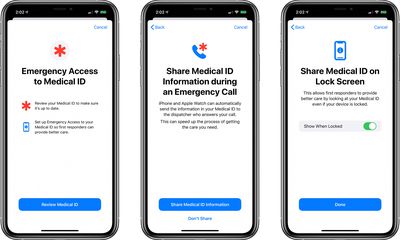 Today's iOS 13.5 beta prompts users to review their Medical ID settings when opening the Health app, introducing options to share Medical ID info during an emergency call and on the Lock screen.

Based on the text accompanying the feature, enabling the option sends Medical ID information to emergency dispatchers who answer an emergency call. Apple says it will provide emergency services personnel with key info like allergies, language, and medical conditions.

iPhone and Apple Watch can automatically send the information in your Medical ID to the dispatcher who answers your call.

This can speed up the process of getting the care you need.

This feature can be toggled on when adjusting medical settings after updating, as can the option to provide access to Medical ID even when an iPhone is locked.

These settings can be adjusted in the Health section of the Settings app by tapping on Medical ID and then the "Edit" option.

According to Apple, when the Medical ID sharing feature is enabled, a call or text to emergency services shares location and encrypted Medical ID info with Apple.

Apple uses location to determine whether Enhanced Emergency Data is supported in your area, and if so, the Medical ID info is forwarded to a partner for delivery to medical services.

If Emergency Calls & SOS in Settings > Privacy > Location Services > System Services is disabled, the feature does not work.

konqerror
Pretty sure it's an enhancement to an existing service where your device sends its location through a company called RapidSOS.

supercoolmanchu
Apple really went overboard stupid on this one.

This cultivated social awareness mentality that they appeared to be getting high on... downside with following any mob reaction (or basically any recent social trend) is that mob’s are ruled by emotion not logic.

The actual underlined, dotted I’d and crossed T’s, preliminary research findings won’t happen at least until next year. At which point the hysteria and clutter in the data always gets cleared, as it does in any ‘disaster’, and likely everything being done will have been for naught. The government never does anything right in a disaster, and their prep is equally laughable with any hindsight.

Nobody has saved any lives here, let’s stop pretending that anybody deserves any medals for social distancing or locking themselves away. Because hiding out of disease fear is the single most selfish, ugly reaction a person could have in a crisis. Those people chose to sit in their caves, while the world crashed, hoping to better pick thru the scrapes after.

All Apple is doing is enabling a horrendously poor social reaction by trying to make a trendy tool to continue into the skid. Worse it’s useless wishy, washy pop-sci-ish bloat with the abuse potential outweighing any supposed benefit.

Tim Cook should be ashamed of himself. He is a horrible person ruining actual technical innovation for the sake of his ego. Worse, he’s a reactionary ninny who often gets it wrong, and wastes investor money on ******** causes purely for the upkeep of his trendy brand name, “I care” persona.

“If saving trees” or “feeling accepted” is a feature you are looking for in a tech product... I’m sorry, you are just superstitious looking for deep personal validation and spiritual significant from a hammer.

As an investor, I think it’s time Apple bottom lines on all of Tim’s pet issues, how much more expensive is the iPhone with the features inspired by Tim overreacting to watching MSNBC on his exerbike? Whatever the savings are, $2 or 10 cents from the price of an iPhone... worth it.

Like what does the Watch cost just without the Breath function? Take that in a second.
Score: 2 Votes (Like | Disagree)

DougieS
Looks like this is USA only. Don’t have this option in UK.

also just noticed the following, looks like health records are due soon for UK. Can anyone confirm when this first appeared in iOS?