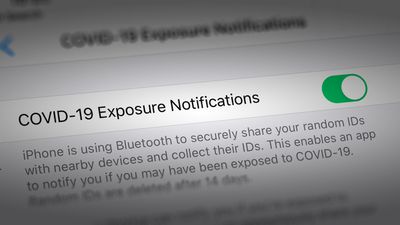 iOS and iPadOS 13.5 introduce the exposure notification API designed by Apple and Google, which is designed to allow public health authorities to create COVID-19 contact tracing apps that are meant to slow the spread of the virus.

The API Apple has introduced is for health-related apps that will incorporate the new API, but there is a toggle in the Settings app that is designed to allow users to opt out of participating in COVID-19 exposure notifications.

Along with laying the ground work for the exposure notification API and accompanying apps, iOS 13.5 makes it easier to unlock an iPhone with a passcode when wearing a mask, as many people are wearing face coverings at the current time.

With the update, the passcode interface pops up more quickly when an ‌iPhone‌ detects that a mask is obscuring the face after a user swipes upward, so it's quicker to get into an ‌iPhone‌ using a passcode than before.

There's also a tweak to Group FaceTime, with Apple introducing a new toggle to disable the feature that automatically enlarges the tile of the person who is speaking. By default, Group ‌FaceTime‌ has a dynamic view with a tile for each person, and the person speaking has a larger tile while other tiles fade into the background.

An "Automatic Prominence" section in the ‌FaceTime‌ portion of the Settings app allows this to be disabled, displaying all of the people using ‌FaceTime‌ in a grid with equal-sized windows regardless of who is talking. A tile can be enlarged with a tap.

iOS 13.5 also patches two security vulnerabilities that affect the Mail app on the ‌iPhone‌ and the ‌iPad‌. One vulnerability allowed an attacker to remotely infect an iOS device by sending emails that consume a significant amount of memory, while another allowed remote code executions.

Huh? You been around here a few years, you know how the beta process goes.....
semi stable when they release a public beta, meant to be tested, battery life never has good as release versions due to debugging.... cmon man
Plus this beta came out 12 minutes ago, how would someone know if its good yet?

Seems you didn’t get my joke? Don’t worry, my friend.
Score: 11 Votes (Like | Disagree)

Mutepointer
The updates beta be good. Get it? Beta? ?
Score: 9 Votes (Like | Disagree)

and Apple is releasing an opt-out built-in tracking mechanism?

The updates beta be good. Get it? Beta? ?

Well, you've lost your status as an alpha male.

Just to clarify...virtue-signalling (a made up word) has to do with looking good...not doing good.

All words are made up.
Score: 4 Votes (Like | Disagree)

COVID-19 contact-tracing apps are just another example of virtue-signalling nonsense that will do more harm than good.

That feature makes no sense. "Random number" implies that you won't be personally identified—come on people—yet they know you have been infected because you've taken the initiative to download an app where you've entered that fact? Then, presumably, while you are infected you are walking around town infecting others. So, you're concerned enough to go to the trouble of letting Apple/Google/Government know you are infected via apps, but not concerned enough to self-isolate??
Score: 3 Votes (Like | Disagree)
Read All Comments